Tony joined the Air Force in 2006, a year out of high school. In 2019, he found himself in Cataract Canyon on an Outward Bound Veteran course. This is Tony’s story.

Sometimes, small town USA can appear desolate—close to something like Tony Winters’ hometown in Illinois with 2,700 people and one traffic stop. But if you drive a couple of hundred miles west, past Chicago and the cornfields in Iowa, past Nebraska and the Rockies, you can drop onto Route 191 that goes south towards Moab, Utah. From there, if you paddle a ways down the Colorado River until you reach a section of water called Cataract Canyon in Canyonlands—there, you’ll find desolation. 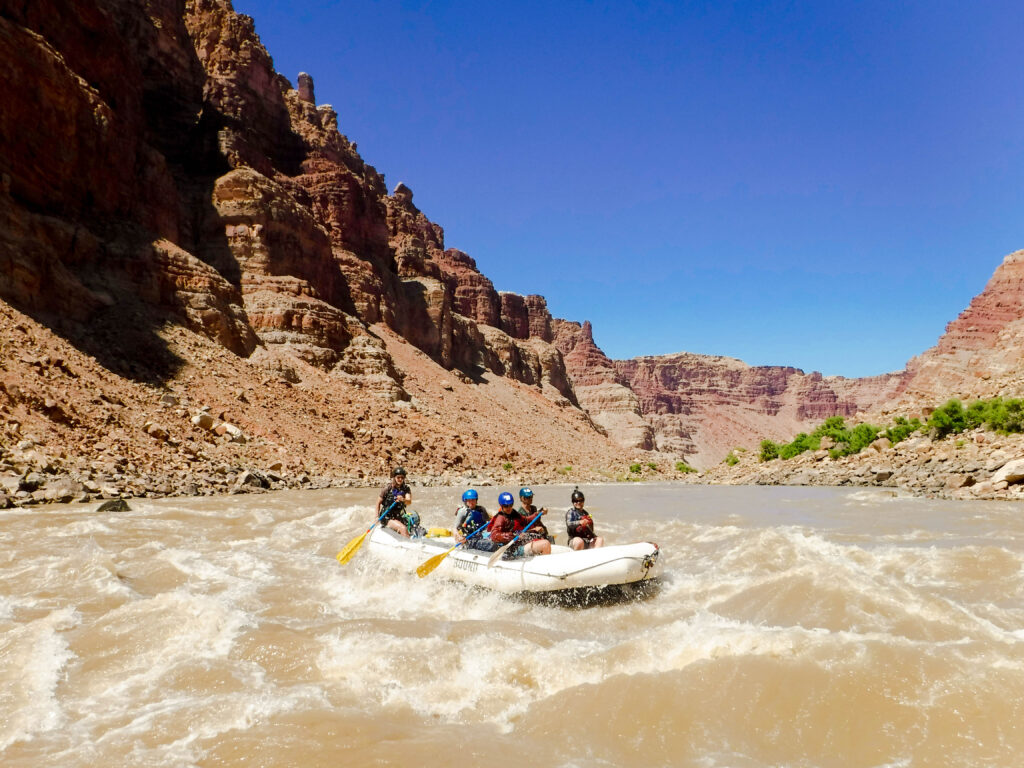 Photo by Olivia Schneider on a rafting expedition in Cataract Canyon.

Who Is Tony Winters?

Tony joined the Air Force in 2006, a year out of high school and remains an active member of the service. He’s been stationed in four different states and deployed five times—twice to Kuwait, and once to Qatar, the UAE and Afghanistan—but we spoke over Zoom from his current home in Nevada.

At the Air Force base, Tony spends a lot of time at the desk, working as the Non-Commissioned Officer in Charge of Unit Deployment Section. There, he manages the movement of people and equipment overseas and stateside, supporting multiple units, headquarters and missions.

As I was talking to Tony, I didn’t get the impression that he sleeps in much. “I’m up at 4:30 each morning,” he said, “then to the gym, and I’m at the office by 7 a.m. That usually lasts until around 16:30 before heading home.” While he may spend a lot of time sitting at work, he doesn’t remain static during his free time.

Tony said that in January 2019, 13 years after he first joined the military, he found himself drawn to the outdoors after a breakup. He went hiking, camping and kayaking every weekend.

“I wasn’t used to having all that time so I started getting outside, and in hindsight, it was kind of like an escape because I didn’t want to sit around my house,” he says.

Around then, a friend told him about Outward Bound’s program for veterans. Tony confessed that he didn’t know much about the program. After enrolling, he began planning his own meals. Meals are covered on every Outward Bound course, but for veterans, everything else is covered too—even the plane ticket and hotel room. 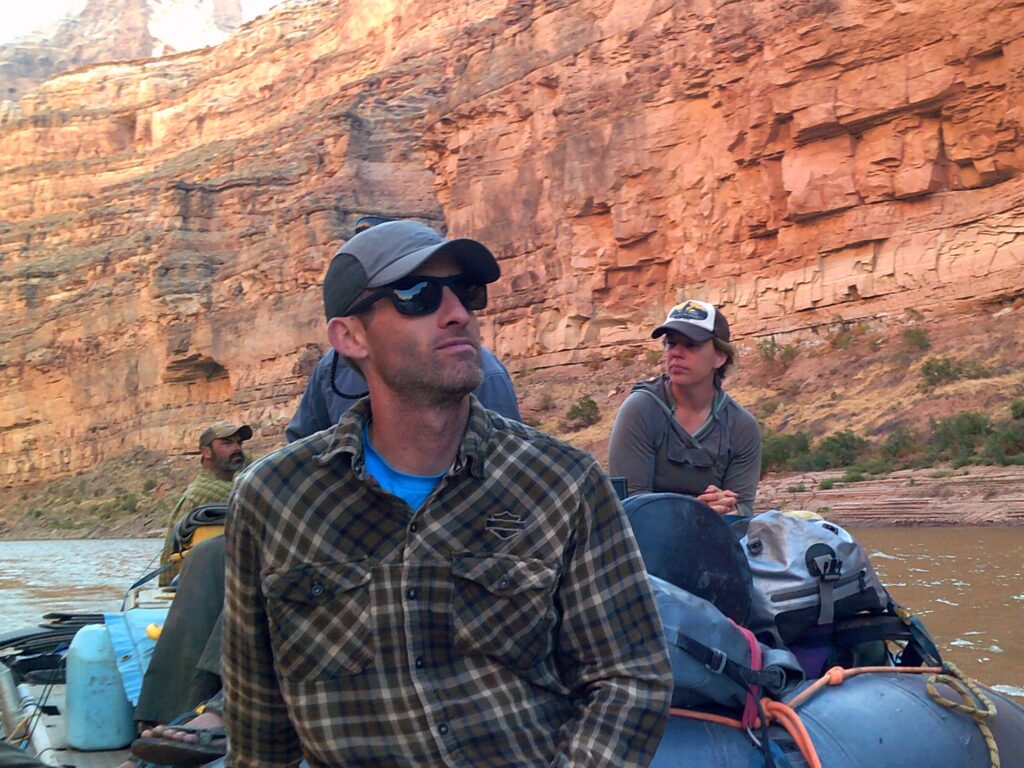 “It’s Completely Different Out There”

Soon after, Tony found himself at the small airport in Grand Junction, Colorado, surrounded by several strangers—his river crew. There’s something universal about every Outward Bound course, and that is the awkward experience of meeting your cohort at the airport. I learned from Tony that even veterans aren’t exempt from the brief quietness that happens at Course Start.

But inevitably, as always, the group found themselves at the boat ramp, loading their gear onto a support boat headed for Cataract Canyon, growing more comfortable with each other and the idea of heading towards a place you can only get to by helicopter or boat.

Tony mentioned that his cohort got to know each other through conversations around the fire each night. It was where everyone started to open up and share their stories—and that’s something he didn’t expect. When Tony shares his Outward Bound experience with others, he says this is often where his audience withdraws, at the idea of sharing feelings around a fire. But he tries to tell them it’s not what they think.

“It’s completely different out there.” Tony said he thought he appreciated the outdoors before the trip, but he grew an even deeper appreciation after being on the river. “Being that deep somewhere, everything was so grand and tall.”

It had been a while since Tony was able to step back from a leadership role and just be a student again. Being a “big routine person,” finding a routine on the river helped him ease into a more comfortable experience.

The group of veterans learned how many miles they’d be traveling each day, where they would be sleeping each night and what their sleep set-up would look like. For Tony, he took to starting the coffee each morning. Meanwhile, his dunnage buddy—a term we use for the partner with whom you share a waterproof dry bag for your sleeping bag and clothing—would help by packing up Tony’s gear. Tony recollected that something he’ll remember from his time on course is the sound and smell of the river and the smell of coffee brewing at the same time. 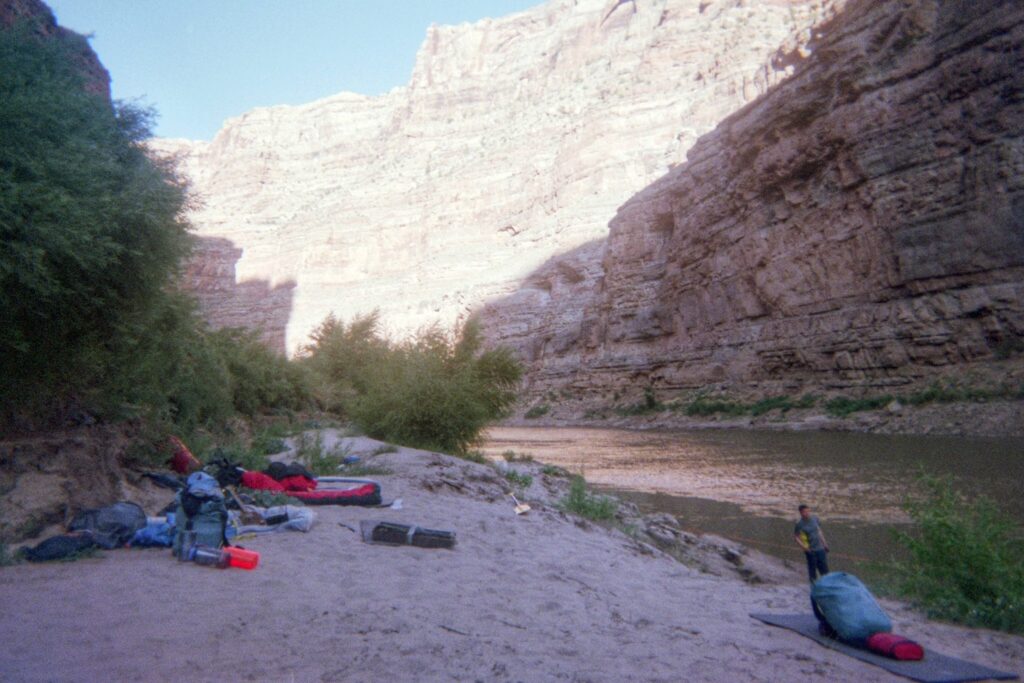 A couple of days in, the group was coming up on one of Cataract Canyon’s notorious rapids called Big Drop 3. On every river course, Instructors encourage each student to learn how to captain the boat and approaching the rapid, it was Tony’s turn to lead.

“I was terrified and kept thinking, ‘I really hope I don’t screw this up,’” he recalls. “The Instructors were casually saying: if you screw up you’ll just flip.” Tony, though, confessed he really didn’t want to flip. He managed to make it through the rapid without anyone falling out of the boat, even when they plowed through a massive hole in the water formed by a rock.

Learn and Do It Well

“Two days ago I was telling someone that [Outward Bound] wasn’t like other trips we saw where the boaters weren’t paddling. We were involved on the trip and I [told the Instructors that I] wanted them to teach me how to read the water.”

Perhaps being a leader in the Air Force, Tony was eager to learn about his environment, but I think that’s just part of who he is. I asked if his short time with Outward Bound compared to his military experience in any small way? He said there was one thing. He remembered when his Instructors showed him how to paddle in the raft when coming face-to-face with those tricky rapids, and the Instructor said something like, “this new skill I just taught you, I need you to do it pretty well.” The same thing happens in the service. 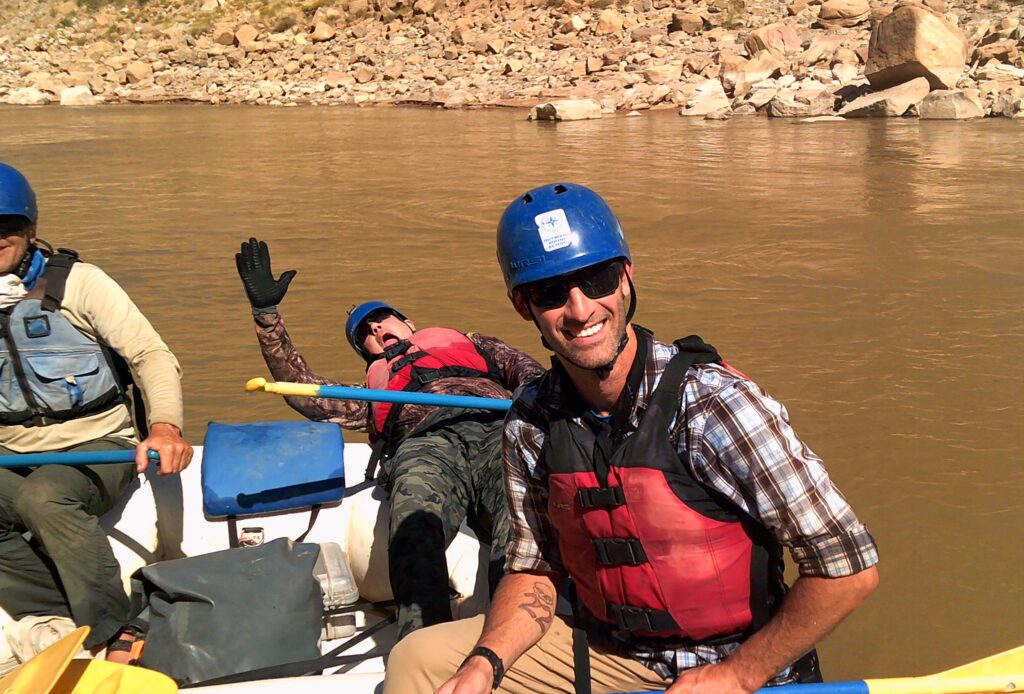 Pictured: Tony and crew on expedition. Photo Courtesy of Tony.

Another similarity was meeting those strangers—his veteran peers—in the airport. “When you move somewhere, you don’t know a soul, and it’s the same when you deploy somewhere,” he said. “You may start as strangers but you’ll all know each other by the end.”

“What’s Something You’re Gonna Change After You Get Home?”

On the last night, as the group shared a conversation for the last time in the wilderness, the Instructors asked the veterans, “What’s something you’re gonna change after you get home?”

Tony told me that being on the river gave him time to think, and his thoughts started to occupy the gaps he neglected to think about before. But, as his turn to speak approached, he became anxious, unsure of what to say. Then it hit him: “I care about people to a fault.” He realized, “I’m not putting effort into people who don’t deserve it. It’s not just one time [when someone disappoints you] and you think they didn’t appreciate something I did for them, it’s the repetition.”

“The emotional part of course was super beneficial. You realize, ‘Man I’ve really been suppressing this,’ and that I’m gonna miss these people after knowing them five days, and before that they were strangers.”

Looking to the future, Tony is five years out from military retirement eligibility. He said he would love to return to Outward Bound to instruct in some way, and we would be lucky to have him. 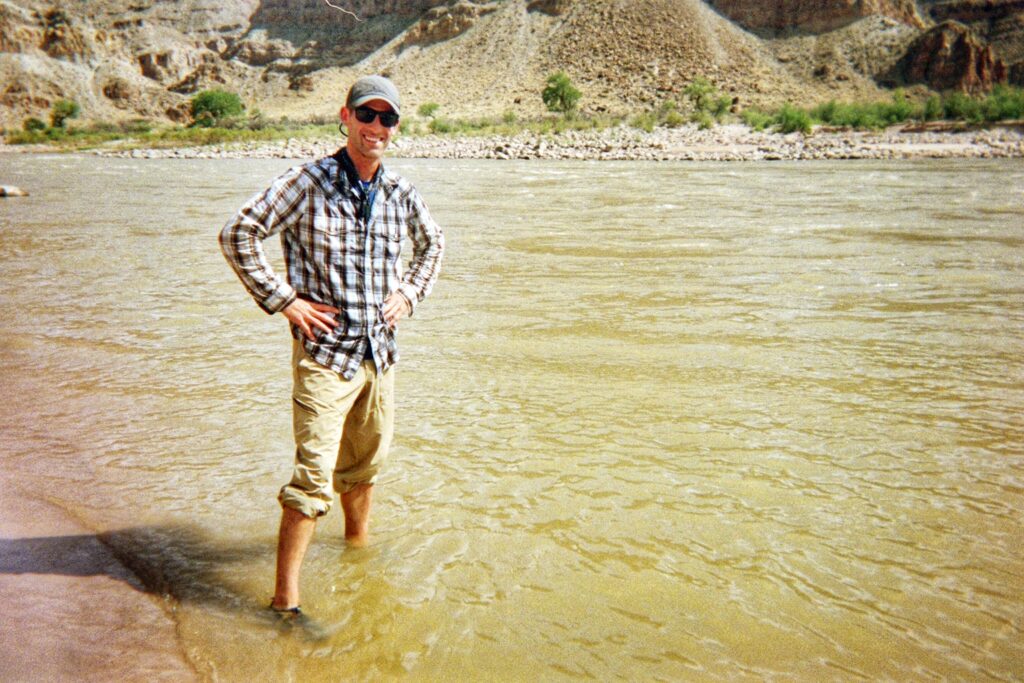 Learn about five organizations that are making a difference in the outdoor industry through their equity and inclusion work and inspiring more people to do the same. In the past…...

Read More
What Is Type Two Fun and Why Is It Good For You?

When it comes to the outdoors, there are two types of fun: type one and type two. The latter leaves you with lessons and memories for a lifetime. ﻿ It’s…...