It’s not difficult to find angst and unrest between civilians and law enforcement authorities these days. It’s a frequent topic on the news and seems to be an issue in every major city across the country. The gap of understanding and respect is all the more concerning when teenagers don’t feel comfortable interacting with the authorities they are encouraged to go to for help, and who are responsible for keeping them safe. The result is an alarming number of kids who feel that police forces are more “against” them than “for” them and officers who feel wary of engaging in an open, friendly manner. Outward Bound in Baltimore set out to change that upside-down paradigm, and their success is changing their community and the future of how cops and kids interact. 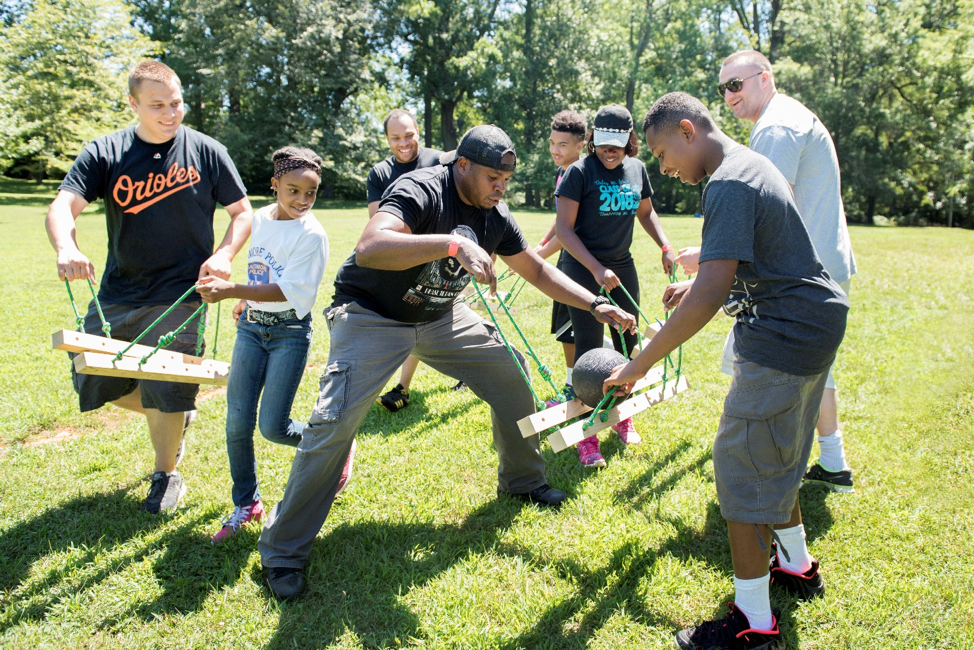 The program aims to lead to sustainable change that addresses the challenges communities face while providing opportunities for youth and police to build meaningful relationships. Photo by Jamie Horton.

A Model For Positive Change

The Police Youth Challenge initiative was created by the Chesapeake Bay Outward Bound School in 2008 to change the perceptions between youth and police. The initial program was successful in changing attitudes and that success was compounded when Johns Hopkins Bloomberg School of Public Health got involved and commissioned a 2012-2015 study to prove the program’s effectiveness. In April 2015, the nation became painfully aware of the conflicts between youth and police in Baltimore following the death of Freddie Gray. Chesapeake Bay Outward Bound School stepped up even further to work with the Baltimore City Police Department to expand the program’s reach to serve all active duty officers, school resource officers, police trainees and Command staff. Currently, every Thursday brings up to 60 youth and officers together to participate in a series of small group challenges–building relationships, trust and respect that has a tangible effect on the community and is a model for positive change that the national Outward Bound organization champions.

A Board Member Reflects: Breaking Down Barriers

In April, new Outward Bound USA Board member Brad Thayer was introduced to the Police Youth Challenge in Baltimore during his first board meeting. An executive whose resume includes Capital One, Boeing and Lockheed Martin, Thayer is no stranger to how authority works. Also an avid outdoorsman, Thayer took the time to share his thoughts about the program. The following is his firsthand account.

Chesapeake Bay Outward Bound School, like its sister Schools, has applied the Outward Bound philosophy to a range of courses within its market. The most traditional–an extended challenge course in the outdoors–remains a core part of their curriculum. 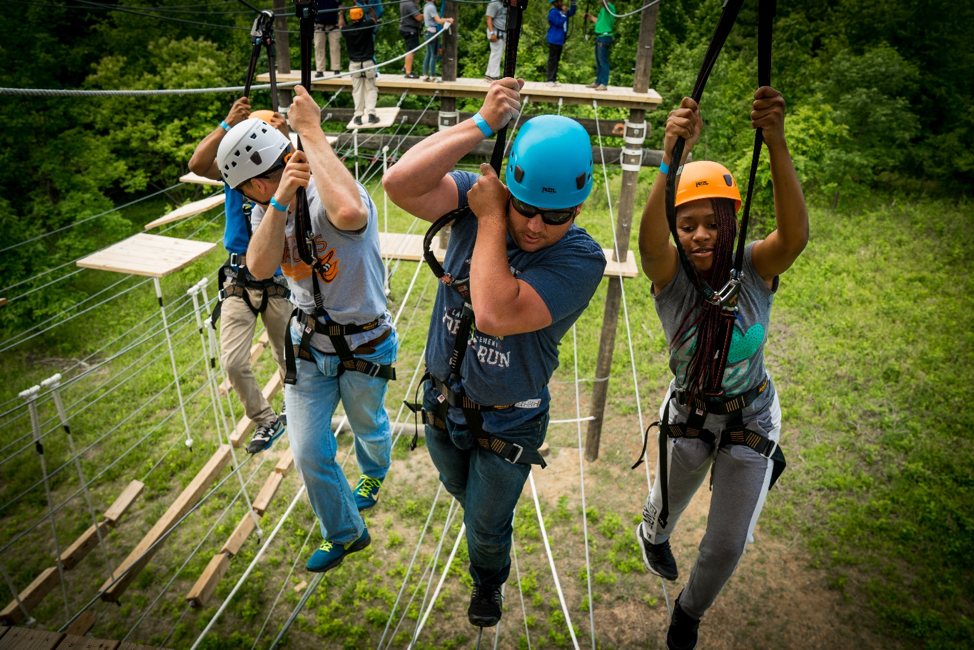 Youth and officers work together in a series of small group challenges to build trust and respect. Photo by Brock Jones.

But what really blew me away was the work that they have done with the Baltimore City Schools and the Baltimore Police Department. The Outward Bound Police Youth Challenge initially was inspired and grew from funding of an Under Armor executive almost ten years ago. In the wake of the death of Freddie Gray and the unrest that followed, the Police Youth Challenge was significantly expanded. Each Thursday, Outward Bound in Baltimore brings together 25 Baltimore police officers and 25 teenage students in a one-day interaction driven by Outward Bound principles. The program challenges them to grow personally while developing compassion for each other’s situation–all within an open, supportive environment.

The Police Youth Challenge has now become a mandatory part of Officer training in Baltimore, for new recruits and grizzled veterans alike. To date, more than 2,100 of the roughly 2,200 Baltimore active duty police officers and all new trainees have participated in the program. Depending on the week and the participating school, students in the program range from youth leaders to students identified as most at-risk for dropping out of school. Baltimore Chesapeake Bay Outward Bound measures officer and student perspectives on each other before and after the day’s program–the positive impact is dramatic statistically, as well as in what we witnessed and the vignettes that were shared with us during our Thursday Board interactions with the program. 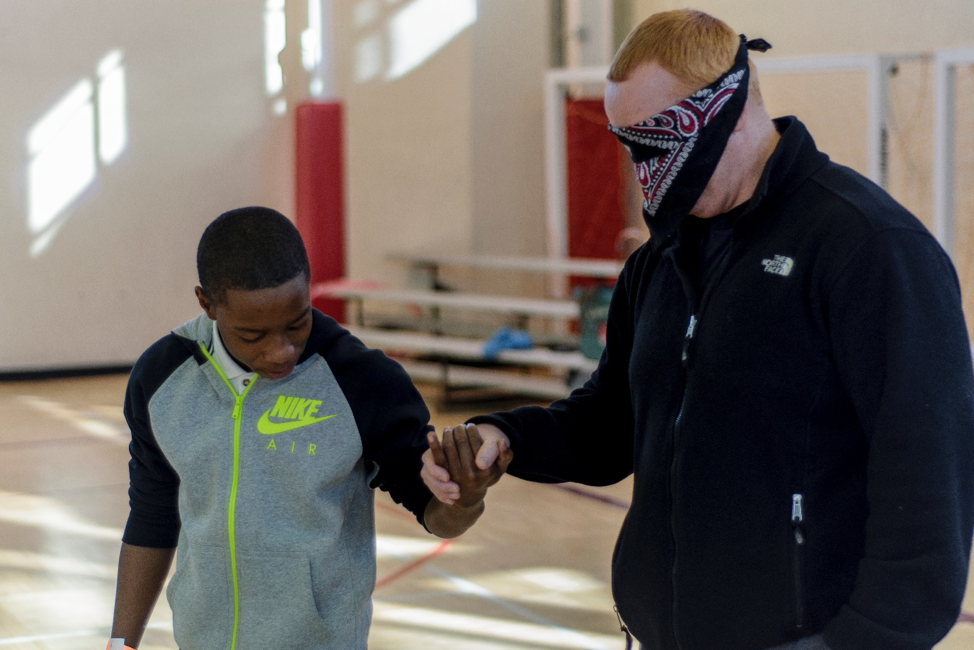 The program has shown a positive impact on relations between youth and officers. Photo by Ben Worden.

What we were told, and what we could see happening in real time, was profound. Officers typically are not enthusiastic at the outset, sometimes bringing to the day a negative bias with respect to the students. The same is true for the students, who often arrive with a negative and guarded view of the police, sometimes protesting strongly against participating at all. As the day unfolds, though, the police come to see the students as having strengths and potential that the police officers had not assumed before. The students also get to know the police officers as real people and experience officers rooting for them to succeed throughout the day.

No one expects that one day or one course will solve the deeply ingrained problems that exist in Baltimore or any of our communities across the country. But Outward Bound is doing tremendous work at chipping away at the challenges in Baltimore–every Thursday.”

Brad Thayer is a Board Member of Outward Bound USA. A native of Southern California, Brad’s love for the outdoors was fostered by his father’s love of camping and fishing in the Western U.S. Brad’s involvement in youth character development was initiated through his own experiences in Boy Scouting, and his involvement with his children as a Boy Scout and Girl Scout leader. Brad and his adult son have undertaken a range of backpacking trips in the Eastern and Western United States, highlighted by their adventure through the 100 Mile Wilderness of the Appalachian Trail in Maine. Closer to home, Brad served as a member of the Board of the St. Andrew’s Episcopal School, an independent, co-educational Preschool-12 school in Potomac. Maryland. Brad is Managing Vice President, Corporate Development of Capital One Financial Corporation, headquartered in McLean, Virginia.

Finding Compassion and Understanding Within the Growth Zone

Every student comes face-to-face with their growth zone on an outdoor expedition. This is the story of one student’s growth zone and how it taught her compassion. Part Three of…...

Outward Bound Instructors create space for students to experience growth beyond their personal comfort zones through physical challenge and backcountry lessons. Part Two of a Three-Part Series on Outdoor Education…...

Packing for outdoor trips can easily turn into a difficult game of weight—what items you should keep and leave. These five items are the splurge items we think you should…...