Backpacking the Cascades With Outward Bound

Expeditions with Outward Bound often remain significant life events for those who have experienced them. Speak with someone who was a pioneer with the program in the sixties, and they’ll be able to recall the once-mundane details of their day-to-day lives on a base camp or in the backcountry with startling detail. But what about students who have only just graduated from an Outward Bound course? What sticks out with them?

I recently had the opportunity to speak with Grayson Alexander, a sixteen year-old who spent two weeks of his summer in 2015 participating on a backpacking and rock climbing expedition in the wild and majestic mountains of the North Cascades in Washington state. 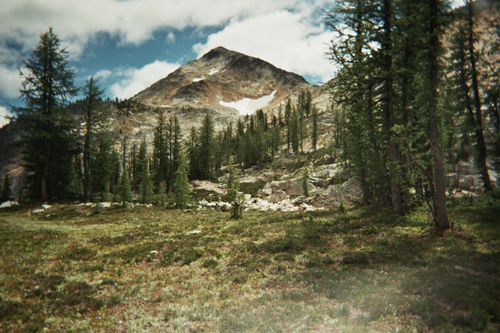 Backpacking in the North Cascades with Outward Bound.

Grayson grew up near downtown Winthrop, Washington, a town only twenty minutes from the base camp of the Northwest Outward Bound School. Downtown Winthrop is something of an oxymoron: the western-themed town consists of no more than a handful of stop signs, and someone with an accomplished arm might throw a stone from one end of town to the other.

Right off the bat I asked him — among the myriad of summer activities, outdoor education and experiential programs — why he chose Outward Bound.

I thought it might be the experience of a lifetime.

Grayson felt that were he not to accept the challenge, the opportunity might not occur again. Grayson is no stranger to the outdoors; he is a member of the local boy scout troop, and his family spends a great deal of their recreational time outside hiking, camping, and exploring. What drew Grayson to his Outward Bound course was the prospect of going on an extended expedition and spending many long hours on foot and many nights in backcountry areas only accessible by trail.

Grayson’s course began when he arrived at the Northwest Outward Bound base camp. There, he met his Instructors, his logisticians, his course director, and most importantly, the other members of his crew, or ‘patrol,’ as we say. They engaged in the usual ice-breaking activities and began the process of learning about one another, beginning with simple things: names, distances traveled that first day, and which fruits or vegetables — hypothetically speaking — they would prefer to be transformed into. 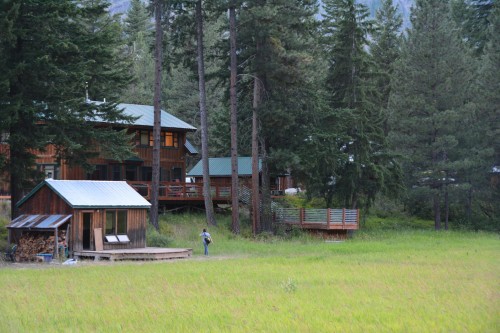 Next, Grayson went through the process of ‘duffle shuffle,’ where staff members and students work through a list of packing guidelines to ensure that everyone has exactly the right gear to be warm, safe, and comfortable, and that they bring nothing else to weigh them down. That first night, Grayson had the opportunity to get to know his fellow students over dinner lit by the growling blue flames of a whisperlite stove.

Grayson admitted to being afraid of the types of students he would spend his two weeks with. He was worried that there might not be enough common ground for real relationships to exist. Or that he would be partnered with people who might be unable to hike or live in the outdoors, and as a consequence of that, bring bad attitudes.

I asked him what the results of those apprehensions were, and he seemed genuinely delighted to have been surprised. He was one of six complete strangers to meet that day, and when I asked him what the other students were like as first impressions, he laughed.

They were nice, outgoing, and fun. They were not at all what I expected. 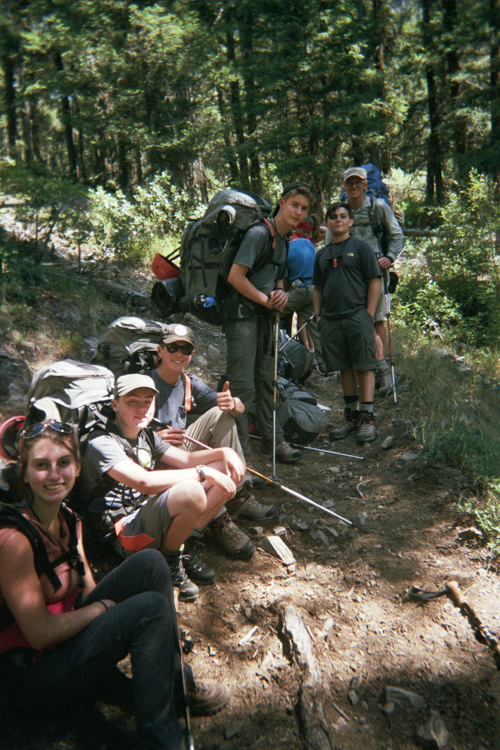 Grayson (second from the left) and his crew.

When I was Grayson’s age, I did my own Outward Bound equivalent, and I regret to have not stayed in contact with anyone from my course. Now, I am always interested to know if students manage to stay in contact with one another after they say goodbye and go their separate ways.

“Do you keep in touch with anyone?” I asked.

Perhaps anticipating my question, Grayson’s response was quick and enthusiastic.

“Oh, yeah!” he said, before listing off their names as though he had seen them that morning.

On the morning of the second day, as though inspired by the kick of a starter’s gun, Grayson’s expedition into the mountains began. They spent a day climbing at the local rock crags, and learned skills from their Instructors including how to pack a backpack and how to take care of themselves in the backcountry (plenty of water, plenty of sun protection and plenty of snacks). 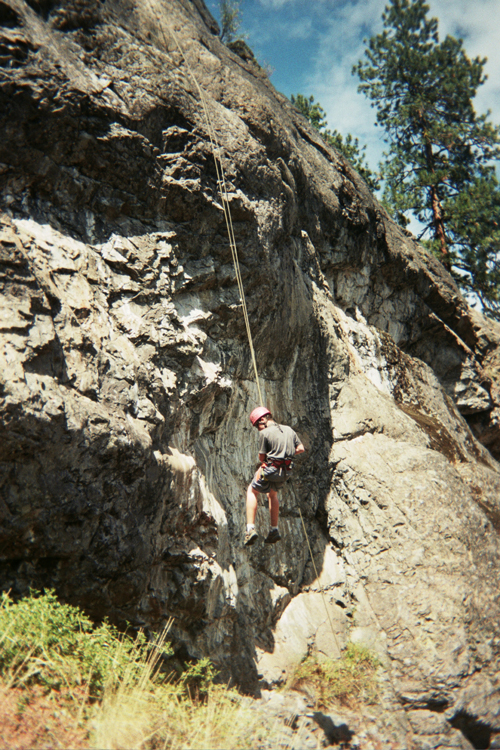 Grayson learning to rock climb on course with Outward Bound

Once Grayson’s patrol was dropped off at their first trailhead, they spent the first few days climbing up to Robinson Pass, bush-whacking across old avalanche chutes to other trails, and ultimately climbing up to Silver Lake: a pool of ice water shimmering at the base of the renowned Pasayten Peak, which they summited. Grayson elaborated on this experience:

It was a blue sky day. One of the highlights, definitely.

His patrol then hiked along the Pacific Crest Trail, traversing up, down, and across valleys, ridge lines, and meadows of wild, open space. They were followed for many miles over the course of several days by a wandering deer that became known as Deborah. They experienced a one-night solo deep in the wilderness, and then came together to complete a two-week expeditionary loop of the Cascade mountains before finishing their course.

After arriving back at base camp, Grayson completed a Personal Challenge Event, which consisted of a several mile run; pushing him to realize, just as the founder of Outward Bound Kurt Hahn said,

'There is more in you than you know.'Click To Tweet

Grayson and his patrol then returned to the local rock climbing crag and tested their new understandings of themselves against the rocks by climbing blindfolded. Grayson remembers feeling surprised by the difference in his body and mind compared to his first few days on course. Afterwards, the expedition officially commenced with the classic barbecue celebration; complete with hot dogs, hamburgers and heaping bowls of gloriously green salad. 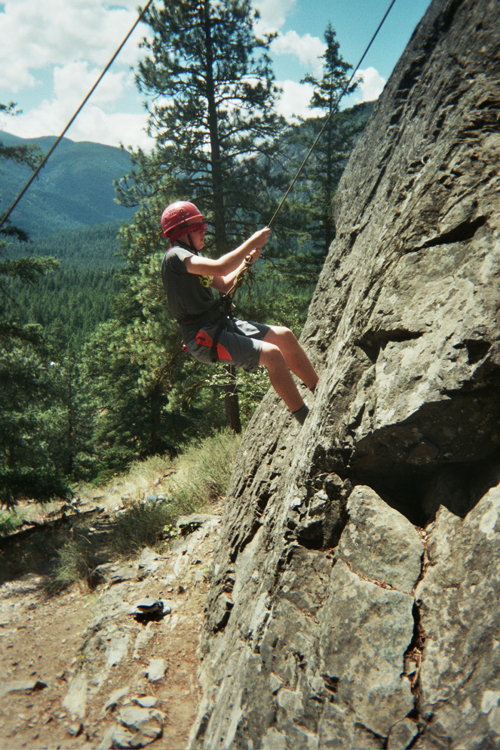 Grayson rock climbing while blindfolded while on course.

“What was your favorite part of the course?” I asked.

Grayson was silent for a moment, and while he told me that he enjoyed summiting Pasayten Peak, and enjoyed the solo night of camping, he had “no specific favorite” moment of course. He said that he loved it all the same, and seemed nonchalant about the answer, as if my asking him to discern a single favorite moment of his expedition was a silly and irrelevant request.

I asked him if he had been afraid of anything during his time in the backcountry.

Many students travel across the country to attend Outward Bound courses, but for Grayson, home was never all that far away, and that knowledge was the hardest part. Up until his time with Outward Bound, being in the woods or among the peaks of the Washington mountains meant that he was spending time with his family. 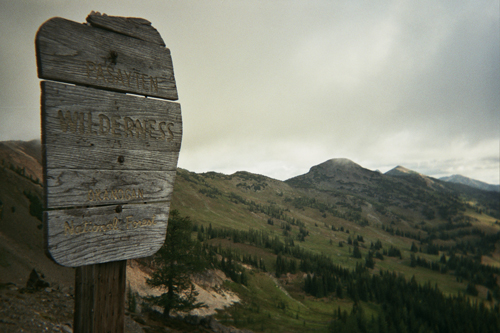 Backpacking in the Pasayten Wilderness area.

I asked Grayson if he had any advice or words of wisdom for future students that may spend that first night under their tarps, consumed by his same fear. Grayson thought about it for a moment, and then replied,

I would say that you just have to rip it off, like a band-aid. If you just do it, it will all be worth it in the end.

As our conversation began to wind down, I wanted to know how he felt about Outward Bound as a recent alumnus. I wanted to know what he had gained from his experience, and if his two weeks in the backcountry had influenced or altered his perspectives on life, family, education, or himself.

I guess I felt more mentally-able, I know that I can do things that I probably thought I couldn’t do.

Grayson reflected on gains that were not simply in the physical spectrum, as well. He told me about learning to better control his moods and emotional responses, and how to augment a low-spirited mood when it was necessary to have fun with his patrol, or step up to a significant challenge.

In addition to the beauty of the wildernesses he experienced and the friendships he cultivated and maintains to this day, Grayson said that another valuable asset he gained during his time with Outward Bound was the “mindset of how other people are,” gaining the knowledge that everyone else lives a life just a complex and full of fear, doubt, wonder, and joy as he did.

Grayson described himself as a “nerd for nature,” and during his course was fascinated by the illusion of being in a world that existed long before the advent of machine-noise. Grayson hopes to pursue an education and career in the world of engineering; nuclear and aerospace engineering in particular.

There are, of course, aspects of the daily Outward Bound life that he does not miss. Grayson works in the local grocery store where the Northwest Outward Bound School supplements their food-stuffs, and when he sees boxes of the grain crackers on the shelves he has to turn away. I laughed; admittedly, those crackers wear out their welcome at lunch somewhat quickly. His favorite meal?

“The bean-and-rice burritos,” he said. “With cheese, and a lot of hot sauce.”

“So, Grayson,” I asked him in the closing of our conversation. “What would you say surprised you the most about your course?”

His immediate answer was both simple and elegant,

'It was the beauty of the path we took.'Click To Tweet

For information about summer backpacking expeditions like Grayson’s, or to learn about our rich selection of other thrilling summer activities, go HERE or call 866.467.7651 to reserve your spot on an expedition today.

Sign-up for our newsletter to keep up on course options, resources, and special offers. William Long is the Head Logistics Coordinator for the Northwest Outward Bound School in northern Washington state. A native of the western United States, he is a graduate of the University of California, Davis. In addition to his work with Outward Bound, he is a practicing fiction writer and an aficionado of good swimming holes.

From location scouting and weather research to knowing a group’s needs and cooking meals, discover tips to make your backpacking trip a success. The first time I instructed a backpacking…...

Packing for outdoor trips can easily turn into a difficult game of weight—what items you should keep and leave. These five items are the splurge items we think you should…...