What Led Me To Trust In My Leadership Abilities

When I was in high school, I had a dream of hiking Vermont’s Long Trail, a footpath along the spine of the Green Mountains that would take around a month to complete. I was inspired by my father who had hiked it in college and had endless stories from his experience. There was one question holding me back, and it was a big one. How was I going to pull this off? I simply did not have the outdoor skills to survive and thrive in the wilderness for a couple of weeks. So I decided to take an Outward Bound course and learn from the best.

Months later, I showed up for a two-week Maine Appalachian Backpacking & Canoeing expedition that would wind along the Appalachian Trail and some of the surrounding lakes. I thought two weeks in Maine would prepare me for Vermont’s swamps, ridges and rugged hillsides because of their relative proximity, and the two have similar trail culture and etiquette.

My logical choice soon became a very real situation when I was dropped off in upstate Maine with not one familiar face. Surrounded by strangers and unfamiliar gear, I was scared, but I was also hopeful. I was here to learn and hopefully have some fun in the forest. What could go wrong? 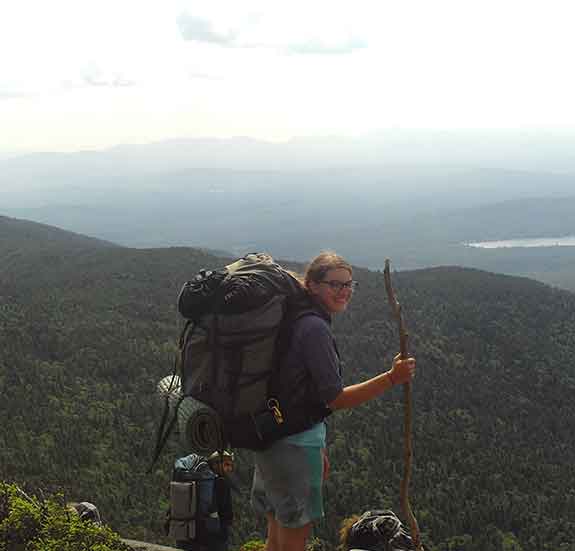 On the first night of our expedition, a volunteer was asked to orient the map, just minutes after we shouldered our packs for the first time. I surprised myself by stepping up. I have never felt natural at the front of the pack, and there always seems to be someone else more fit to lead. But, it was my voice that had broken the prolonged silence after the Instructor’s invitation. As I tried to make sense of the cramped, foreign map, I expected to be smacked with the judgment and pressure that came with the spotlight. But besides my patiently waiting crew, it was just me and the faded contour lines under the dusky sky.

I ended up successfully leading our crew farther from the campsite in my best first effort in navigation. Though the trail and the map were shrouded in the darkness of thick deciduous forest, the road to becoming a leader was suddenly flooded with light. For the first time, I was able to stand at the trailhead of leadership and study its path face on. It was wide open and clear. 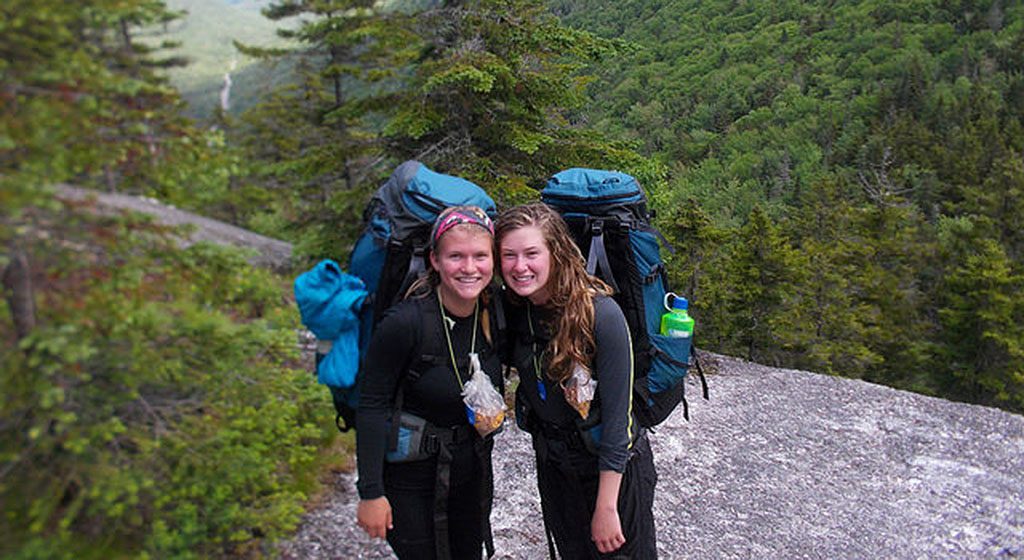 A  week into our adventure—at the brink of dusk—just as we were about to cross a large lake to our intended campsite, we got caught in a rainstorm. We were wearing nothing but bathing suits and life jackets as rolls of thunder and gusts of wind blew in. For safety purposes, we ended up staying where we were. But no one quickly stepped up and offered up their best effort to establish a makeshift camp. So I remember donning every dry layer I owned and thinking hard about each task that needed to be done before we all went to bed. The hours before we slid into our sleeping bags were packed with tasks, but they had to be done.

I remember initiating dinner to boost energy and mood. I remember getting a team together to move and flip the canoes so they wouldn’t fill with rain and waves. I remember realizing, along with others, that our food had not been hung properly to evade animals, so we slung the sacks up into a tree at the stroke of midnight.

I was wholly surprised. Why was I was the one on the front lines in this situation? I learned that if I wanted tents to be set up, well, it was my responsibility and honor to initiate it.

It might have taken me 17 years to come to the realization that anybody can be a leader, and what that means in practice. I didn’t have to bestow encyclopedic amounts of knowledge on others to be a leader, though some great leaders do. I didn’t have to have inhuman amounts of courage and persuasion to be a leader, as some great leaders are. If I just relieved the pressure that my subconscious supplied as a check to my adventurous side, I could at least try my hand in the many tasks that survival has to offer. Before Outward Bound, I was sure that my lack of confidence was here to stay. But my expedition forced my brain to rewire, and this newfound weightlessness awed me. 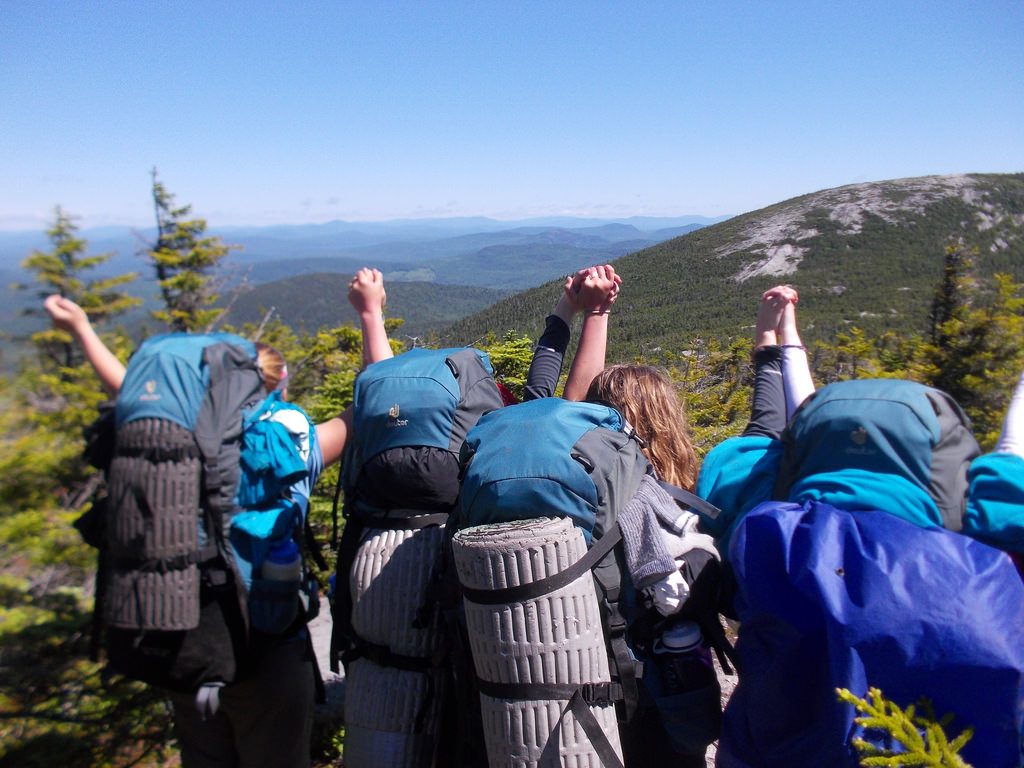 The summer after my expedition, I planned my Long Trail journey and invited three friends. Just like that, I was suddenly in the role that my Instructors were in as they presided over our crew the summer before. I had no qualms about putting myself there. Instead of shying away from this leadership role, I was ready to give what I had to offer. I’m not sure if it was the beautiful views of my home state in dawn, dusk and daylight or the quirky characters we met on the Trail, but the time I spent on the Long Trail was an integral life experience.

Not long after, I entered my first semester of college. And I thrived. I used what I learned from my days with Outward Bound, including leadership skills and confidence and also put my technical skills to use. I led groups of other students on some of my favorite hikes, and skied at my favorite ski areas. I used my outdoor knowledge as a member of the Snow Bowl Ski Patrol. 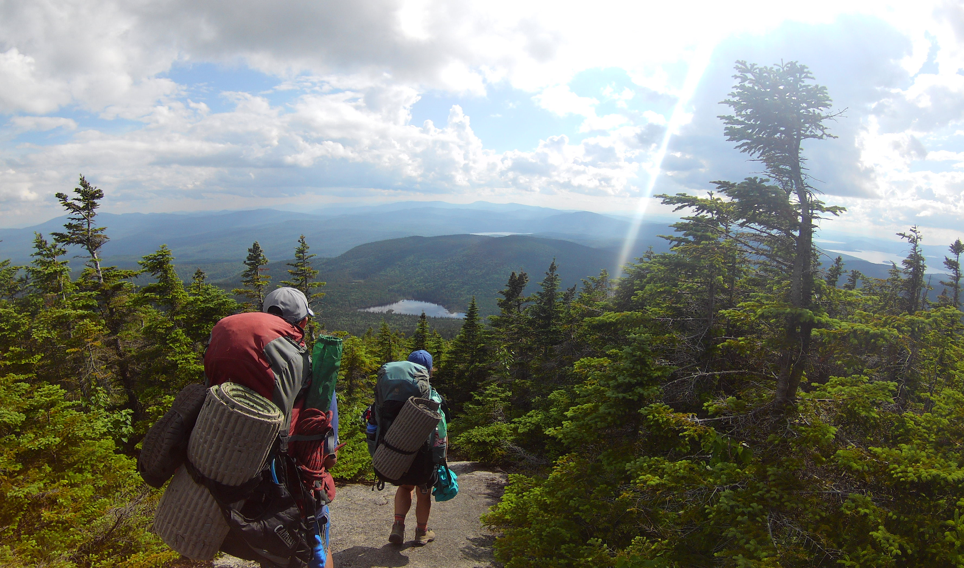 Hiking the several mile long open ridge of Saddleback Mountain, a former ski area. A gorgeous day hike on the Appalachian Trail that I hope to show my family and friends next time we’re in Maine. Photo by Silvia DiRocco.

Leadership is the bridge between one person’s knowledge and a group of others. I was successful in breaking the mental barriers that were stopping me from creating that bridge. Finally there was a bridge between me and the world. I began to realize that any leader is more than welcome—and they are needed. From now on, I’ll do everything that needs to be done to fulfill my duty as a leader—whether that’s on campus, at the Snow Bowl, or in my career later on.

Emma Ramirezricher is a student at Middlebury College in Vermont. She went on a two-week long backpacking and canoeing trip during the summer of 2017 through Hurricane Island Outward Bound School out of Newry, Maine. As a Vermonter, she enjoys hiking in the Green Mountains and skiing at Sugarbush, Mad River Glen and the Middlebury Snow Bowl.