← Back to Expedition Finder
Photograph (above) taken by Calvin Croll

Photograph (above) taken by Calvin Croll

Add to Favorites Request Information SEE ALL
« Back to Search

This three-week backpacking and sea kayaking course is your opportunity to explore the rugged North Shore of Lake Superior and the pristine Lake Superior National Marine Conservation Area of Canada.

Build self-confidence, enhance your decision-making abilities and develop self-reliance on this exciting, challenging and introspective adventure. First, learn the art of paddling and balancing a sea kayak and complete challenging open water crossings amidst fog, waves and adverse weather conditions along the rocky, remote Canadian Superior shoreline. Next, trade kayaks for backpacks and hit the Superior Hiking Trail, which meanders through dense boreal forest, offers awe-inspiring overlooks and plunges into pristine river valleys. Ideal for individuals looking to gain outdoor skills and embark on an impactful personal challenge, this journey through the remote and unspoiled North Woods of Minnesota and Ontario is the expedition of a lifetime.

*Please note that you will be required to have a valid passport in order to cross into Canada. If you do not have a passport or need to renew it, please start the process now as it can take weeks to receive your passport.

I have grown and challenged myself during this course and I am more focused on things I can do to challenge myself in life. I will carry this experience with me as a positive reminder on the lessons of life and the importance of challenging myself.

Do you ever want to unplug, step away from your daily responsibilities, and face new challenges? Adventure is calling! Outward Bound’s Classic expeditions for adults are designed to help you hit the reset button by breaking your routines and radically changing your surroundings. This is an opportunity to build new skills and remind yourself (or discover for the first time) what it feels like to crest a mountain peak, hear the echoes at the edge of a vast canyon, or feel the rush of whitewater. Put some “firsts” in front of you and you’ll find that the moments of unexpected discovery linger long after you return home. 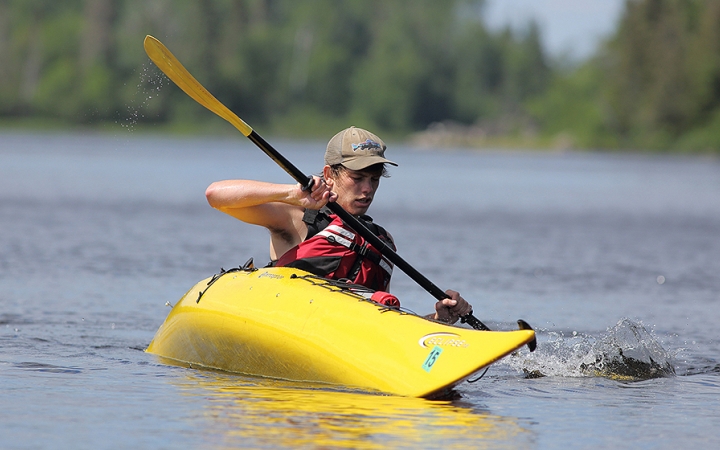 Student groups travel to the Canadian north shore of Lake Superior to begin their sea kayak expedition from the Lake Superior National Marine Conservation Area. Students learn the art of paddling a sea kayak in varied weather, landing the craft in a variety of conditions, as well as navigation and rescue techniques. Instructors share the secrets of handling and balancing the boat safely, regardless of the elements. Students develop paddling skills and bond as a group while traveling and camping along the rugged, rocky Superior shoreline.

During climbing days, students learn about general rock climbing equipment, safety and etiquette. Students have many opportunities to climb, belay and rappel while learning and employing safety systems that are compliant with national standards. The rock climbing sites provide a number of different route options including cracks, sheer faces and chimneys. Regardless of a student’s rock climbing background, they are sure to find a route that will engage them and encourage the expansion of their comfort zone. 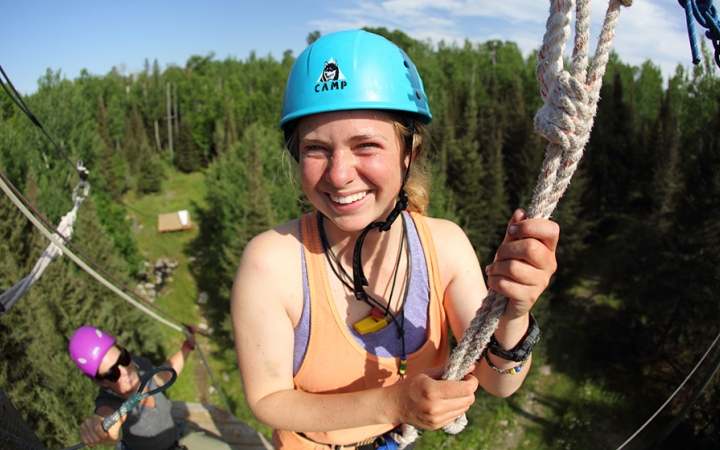 Looking out over the top of the boreal forest and located 30 feet in the air, the high ropes course is incredible. Students swing from Tarzan ropes, walk on tightrope wires and climb a cargo net before jumping on the zip line for an exhilarating ride back to solid ground.

Service is a cornerstone of every Outward Bound experience. From the seemingly small daily acts of service for the environment to the regular tasks of being part of an expeditionary team, students have ample opportunities to experience the value of giving back to the larger community. On the expedition, students are encouraged to practice environmental stewardship in the form of Recreate Responsibly ethics. Students also practice regular acts of service for their team by preparing and serving meals, securing drinking water, setting up camp, and giving their crew plenty of support.

The Solo experience provides an important break from the rigors of the expedition and gives students the opportunity to reflect on their Outward Bound experience. Many students use this reflection time to make decisions about their future, journal and enjoy the beauty of their surroundings unencumbered by the constant external stimulation of modern life. The duration of Solo depends on the course length and type, as well as the competency and preparedness of the student group. With all the food, skills and supplies they need, students are given a secluded spot to reflect alone, and are monitored by staff throughout the experience to maintain safety. Students find that Solo provokes profound and powerful learning in a short period of time and often becomes one of the most memorable parts of their Outward Bound course.

Outward Bound courses vary in length from four to 85 days. On shorter courses, participants will receive an introduction to leadership skills, strength of character and a desire to serve while activities fill most of the time and the pace is quick. With longer courses, the same outcomes and benefits are achieved with the opportunity to reach a more profound level of mastery as there are more chances to develop technical skills, receive and implement feedback and further personal development. However many days the expedition lasts, the strength and impact of the experience lasts a lifetime.

Kayaking, backpacking and wilderness navigation techniques are great practice for the essential skills and habits that help prepare for new challenges at work, home and in the community. Outward Bound expeditions encourage students to:

Outward Bound courses are designed to expand and stretch your limits so that every expedition is a true accomplishment and a memorable journey.

The largest inland sea in the world, the clear emerald green waters of Lake Superior offer a great variety of paddling conditions for sea kayakers. The Lake Superior National Marine Conservation Area is a wilderness archipelago along the Canadian north shore of Lake Superior. A rugged and pristine landscape of sparkling, clear water, cliffs, pebble and sand beaches and numerous islands, it is the largest freshwater, protected marine environment in the world and an ideal destination to hone sea kayaking skills.

On the southern edge of the massive granite rock formation known as the Canadian Shield, which runs from Minnesota all the way to Hudson Bay and the Northwest Territories, sits the largest freshwater lake in the world, Lake Superior.

The Superior Hiking Trail is a 296-mile footpath that largely follows the rocky ridgeline above Lake Superior on Minnesota's North Shore from Duluth to the Canadian border. Well-marked trails, campsites and challenging terrain make this a perfect thru-hike destination.

I have grown and challenged myself

I have grown and challenged myself during this course and I am more focused on things I can do to challenge myself in life. I will carry this experience with me as a positive reminder on the lessons of life and the importance of challenging myself.

— Zach Voyageur Outward Bound School Alum
You are stronger and more capable than you think you are.

What did I learn from my Outward Bound experience? Just because there's an easy way, it doesn't mean it's the one you can or should take. When it doesn't seem like there's a clear path, by pausing and looking again, new paths can appear. You are stronger and more capable than you think you are. If you can't get out of it, get into it. Living purposefully and intentionally allows me to become more fully whole and human. You can't control what others will do or what will happen to them (or to you), all you can do right now, in this very moment, is to be here right now and to enjoy it for what it is.

Every ritual, routine and challenge were exactly what the doctor ordered. I could not dare accomplish this without our Instructors. They knew exactly when to step in with support and encouragement. It was if they were in my head and knew what I needed.