← Back to Expedition Finder
Photograph (above) taken by Miron Golfman

Photograph (above) taken by Miron Golfman

Add to Favorites Request Information SEE ALL
« Back to Search

Feel the exhilaration of rushing waves, the satisfaction of navigating through them and the contentment of wilderness nights under star-filled skies.

No previous rafting experience is necessary to fully embrace this extraordinary expedition. Step onto a raft and feel the exhilaration of rushing waves as you paddle through white water. Learn fundamental navigation skills and help guide your crew through the canyons. On the river, learn both the basics and the fine points of managing a paddle raft through some of the best whitewater in the West. Leave with an increased knowledge of leadership, team work and sense of self.

Bob pulled me aside that night and asked me to walk with him down to the river after everyone split off. We sat on the bank and he told me that he had never seen someone go from so terrified and so aware of a risk, to so focused and composed. He asked me what changed, and the only reasoning I could give him was that we had to make it through that rapid. I took the job of getting us to the other side, so I had to get the job done right. The rapid pushed me into a new state of mind.

It’s time to make your own adventure. Outward Bound’s Classic expeditions for middle and high school students are built with you in mind. Make new friends, sleep under the stars, and learn skills like backcountry navigation and how to cook a delicious meal no matter where you are. You’ve got this! Whether you’re in a raft or on a mountainside, you’ll learn what you’re made of – and you’ll see first-hand how far teamwork can take you. Join us for an unforgettable challenge and discover a whole new way to get outside. 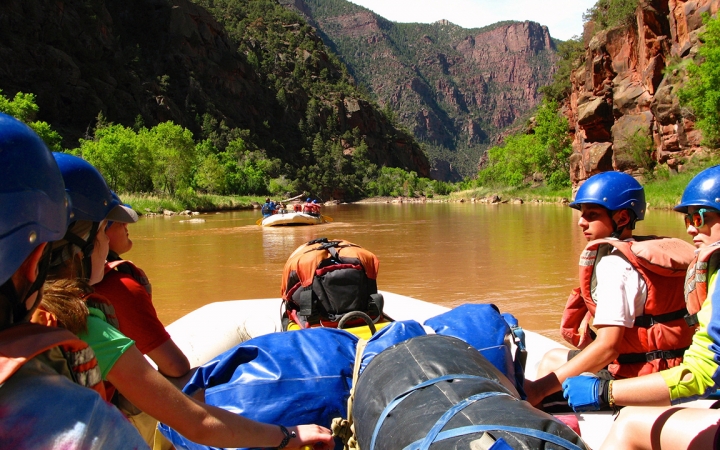 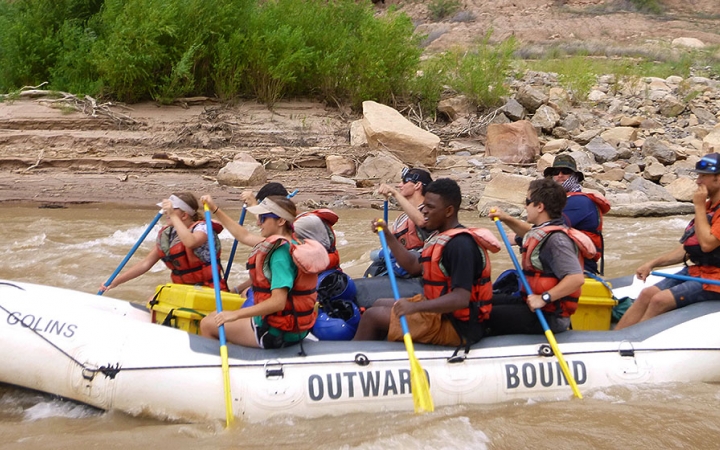 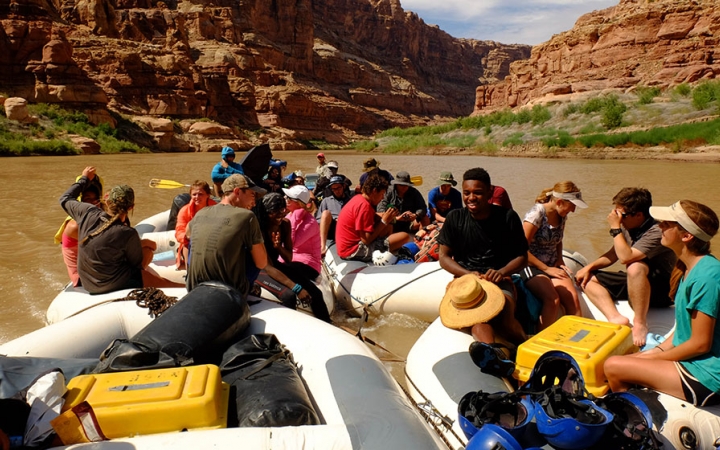 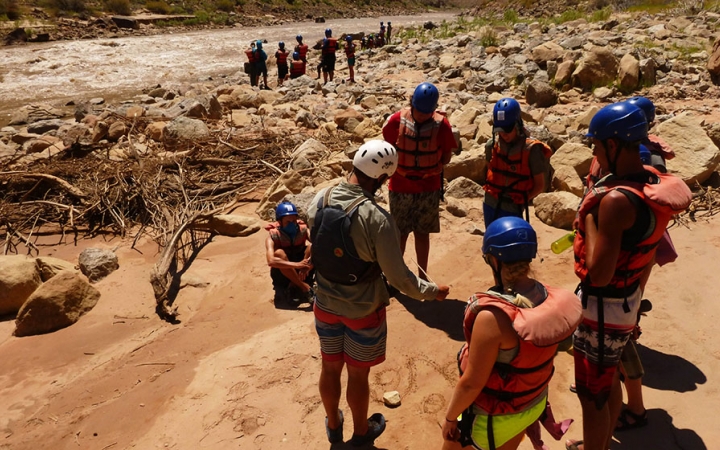 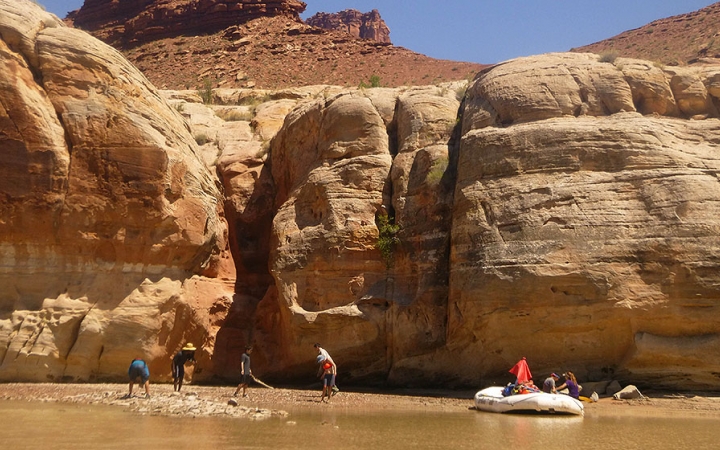 Each day on the river is spent learning to recognize and navigate various obstacles and hazards in the river and how to anticipate the forces of the current from far enough upstream. Students work to become a team, coordinating spacing and paddle strokes. Each student  will have an opportunity to be the captain of their raft and practice new skills as they maneuver through adrenaline-filled rapids and flat-water sections.

In some places the canyon rims rise thousands of feet above the river, enclosing participants in a remote world of rushing water, delicate ecosystems and unbelievable beauty. Most courses get the opportunity to take day hikes away from the river and up to the canyon rim. These hikes provide stunning views, a change of pace and often the chance to see Native American archeological sites, petroglyphs, pictographs and strange but remarkable geological formations.

Participants follow Leave No Trace ethics as service to the environment and do acts of service while leading and supporting fellow participants. Students develop a value of service, seeing the impact of their actions firsthand and transfer this desire to serve their communities back home. Past projects have included working on a goat farm, building trails, cleaning trash and debris from natural spaces, working with a local community garden, and removing invasive species.

In order for profound learning to take place, there must be time to reflect on the experience. . Weather and time permitting. Solo provides an important break from the rigors of the expedition and gives students the opportunity to reflect on their Outward Bound experience. Many students use this reflection time to make decisions about their future, journal and enjoy the beauty of their surroundings unencumbered by the constant external stimulation of modern life. Solo is that opportunity, and that time can range anywhere from 30 minutes to 24 hours or more, depending on the length of the course as well as the competency and preparedness of the student group.

Depending on permits and river conditions, the course will take place in one of the following regions throughout Colorado and Utah:

Gates of Lodore on the Green River

This course begins along a whitewater section where the Green River enters the imposing Gates of Lodore. Red sandstone escarpments rise up 2,000 feet above the river as it carves a 45-mile course of placid flat-water and raging rapids through three dramatic canyons — Lodore, Whirlpool and Split Mountain. Students are privileged to witness the towering cliffs as well as rock art from the Fremont people, who called these canyons home over 1,000 years ago. These regions are within the ancestral lands of the Núu-agha-tʉvʉ-pʉ̱ (Ute) nation).

Cataract Canyon cuts through the heart of Canyonlands National Park. Natural wonders and ancient archeological sites are found in the canyon on the way to the confluence of the Colorado and Green Rivers. The Colorado River roars through 31 exciting rapids including the famous Mile Long Rapids and “the Big Drops.” These regions are within the ancestral lands of the Núu-agha-tʉvʉ-pʉ̱ (Ute) and Pueblos nations.

There are few instances in the United States or the world where a river runs free and wild without dams, highways, railroads or other manmade creations for its entire length.  The Yampa is a symbol of wild rivers around the world, and it is the only major tributary of the Colorado River system without a dam controlling its flow. Students paddle through deep sandstone gorges and Class II- Class IV rapids with their expedition mates. The Yampa is one of the most sought-after rivers on any river-runner’s list, due to the exhilarating whitewater, rich Native American history from over one thousand years ago, storied recent political history and riverside wildlife. These regions are within the ancestral lands of the Núu-agha-tʉvʉ-pʉ̱ (Ute) nation.

The rapid pushed me into a new state of mind.

Bob pulled me aside that night and asked me to walk with him down to the river after everyone split off. We sat on the bank and he told me that he had never seen someone go from so terrified and so aware of a risk, to so focused and composed. He asked me what changed, and the only reasoning I could give him was that we had to make it through that rapid. I took the job of getting us to the other side, so I had to get the job done right. The rapid pushed me into a new state of mind.