20 Photos That Will Inspire You to Become An Outdoor Educator

Three weeks before I was supposed to leave for my Outdoor Educator expedition, I typed up an email saying I couldn’t commit to 50 days in the wilderness and would need to unenroll. I left it in my drafts folder for a day, but I (thought I) was sure—putting my life on hold for several weeks to live in the wilderness and gain leadership and technical skills was not worth my time. Fast forward to a few weeks later, and I found myself on a ferry with seven strangers beginning our expedition in the Pacific Northwest.

My gut told me I couldn’t say no to this opportunity. I believed in the mission to get more people in the outdoors, and wanted the skills needed to contribute to that mission. When I kept circling back to that logic, I had to go on the course because I recognized it was something I truly found value in, and it was worth giving my time to. I booked my travel and packed my bags, and what I gained from saying yes was 100 fold more than I could have ever imagined.

Our days were spent in a constant forward motion; kayaking between islands and hiking to reach the next ridge. Skills were taught and developed in the moment, making the present state of affairs the only thing that mattered. I attained a range of skill sets, as promised in the course description, but the greatest gift I walked away with was the magic found in a shared experience with my crew.

Friendship and trust were built in the simplest day-to-day acts—from cooking spicy Thai noodles on the beach to setting up the tent for the fifteenth night in a row. We took turns answering 20 questions as we navigated across the sea and exchanged encouragement on hard climbing routes. One of our crew members had a birthday and we celebrated with warm, gooey brownies. When we were met with falling snow amongst the grand granite spires we embraced our place in the world with deep belly laughs and trail stories.

I would not trade those 50 days for anything. Coming back, I realized I didn’t view this season of life as being put on hold, but instead the greatest stepping stone into the next chapter of my life. Summing up my time with Outward Bound is like trying to stuff a backpack for the first time—not knowing where to start or how to end. I left with a collection of stories too long to write in a single journal, a tattered puffy jacket, a new sense of confidence, and the beauty of an unwavering community that comes only from spending an extended amount of time with others in nature. I am a better version of myself because of my crew and the lessons we learned together and from each other.

The following still shots are a great representation of the joy of those days and the group of humans who made even the longest miles worth it.

Note: All photos are credit of Charis Nichols, graduate of the Northwest Outdoor Educator expedition. 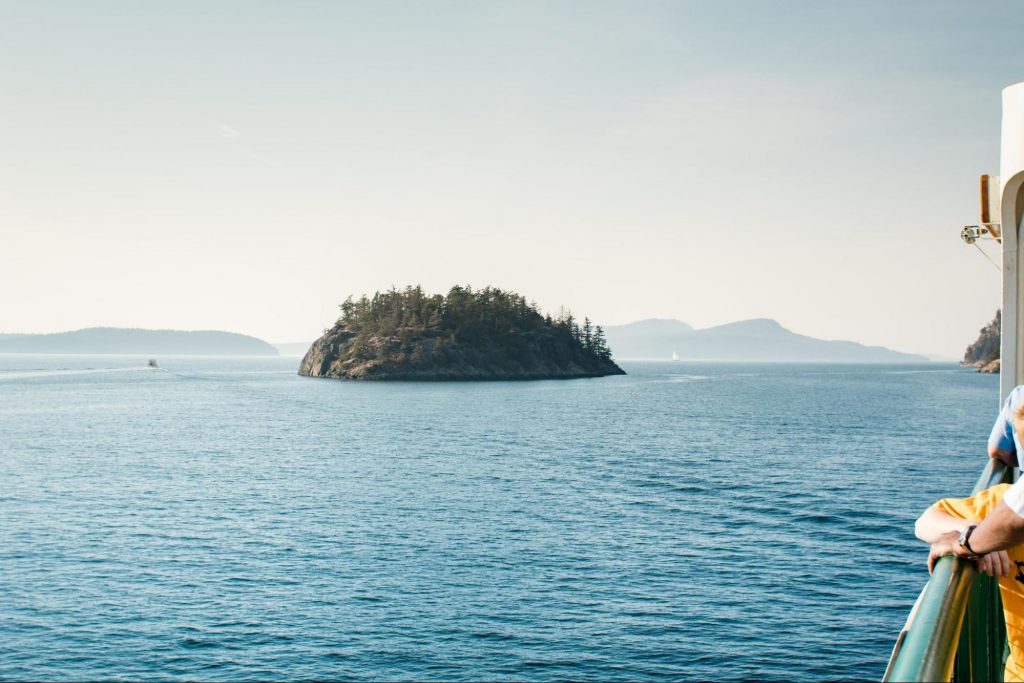 Ferry ride to the start of the course in the San Juan Islands in Washington. 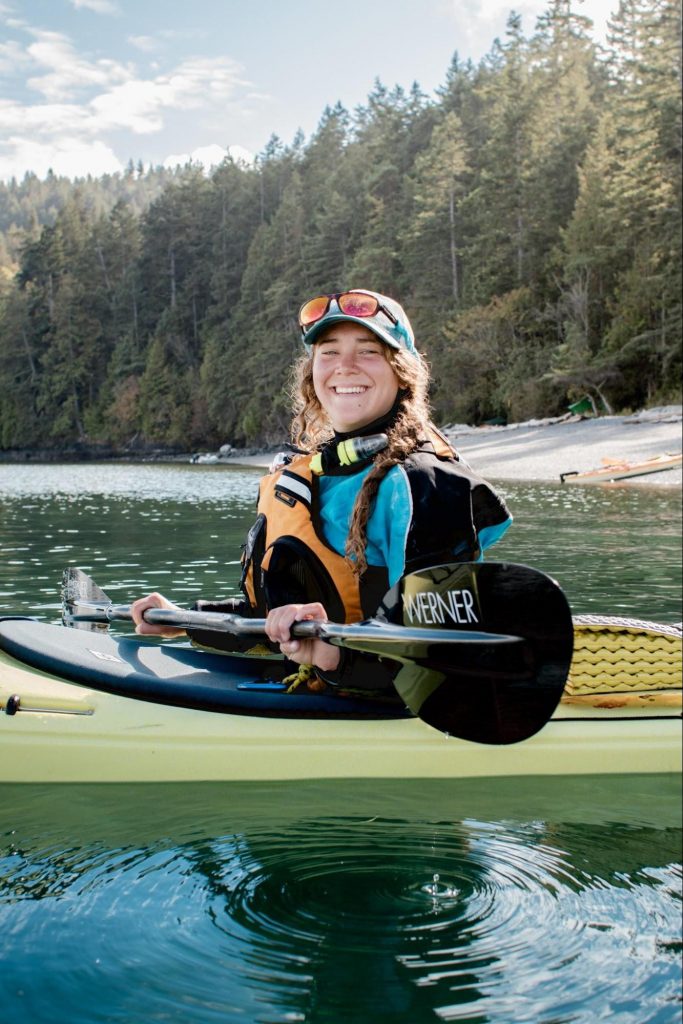 One of the course Instructors, Tedra, soaks in two of her favorite things—sun and sea. 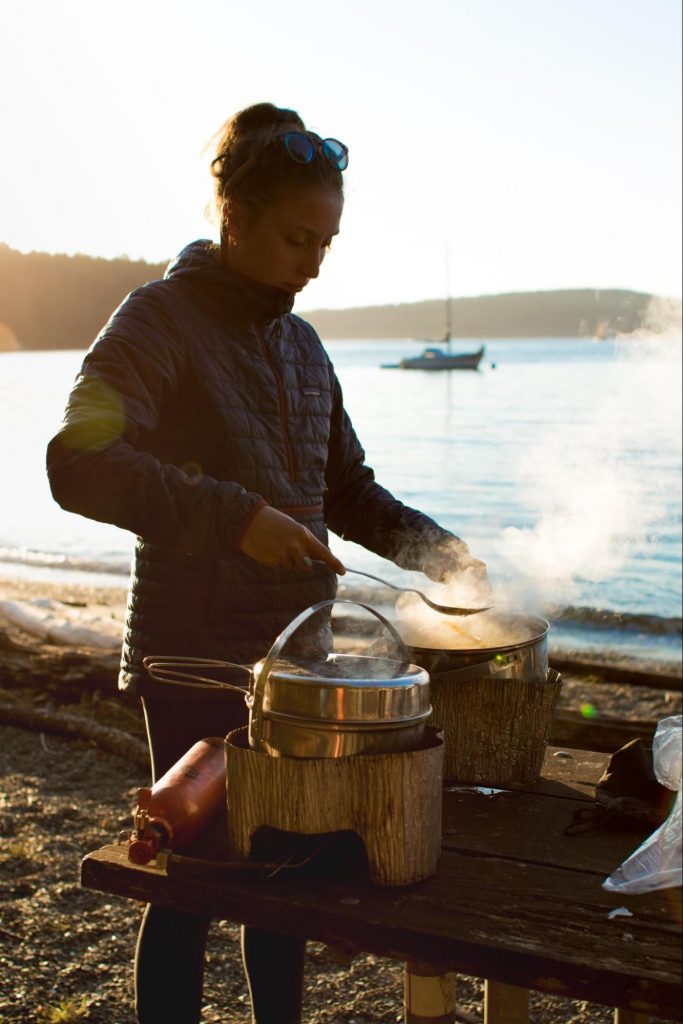 Maddi is cooking up some pasta by the sea after a rewarding day of kayaking. 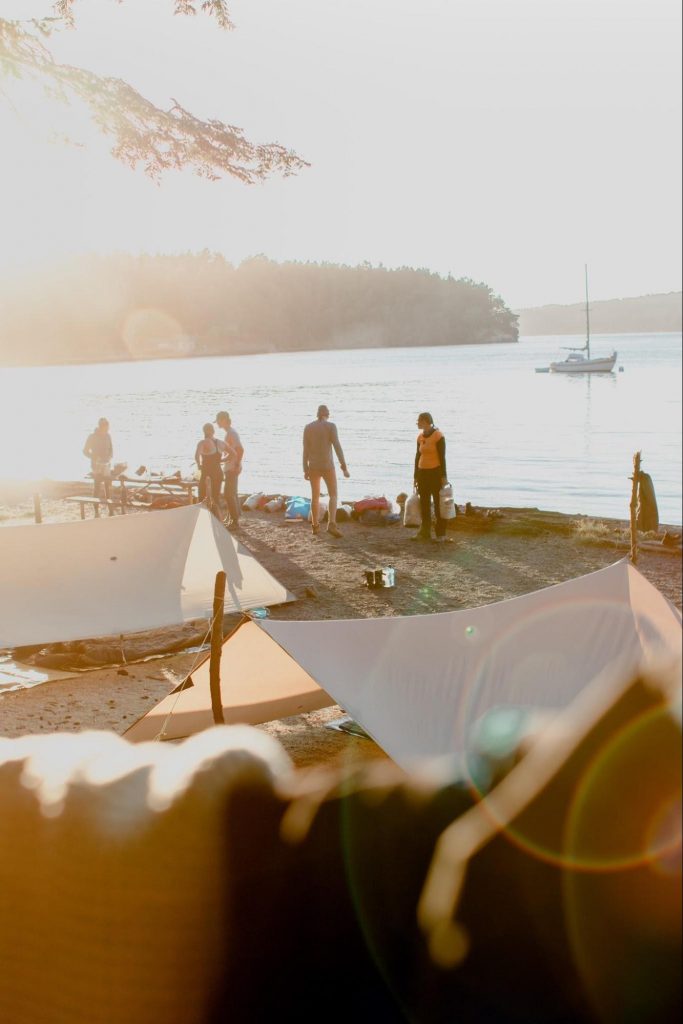 At camp, it was always all hands on deck until dinner was prepared. 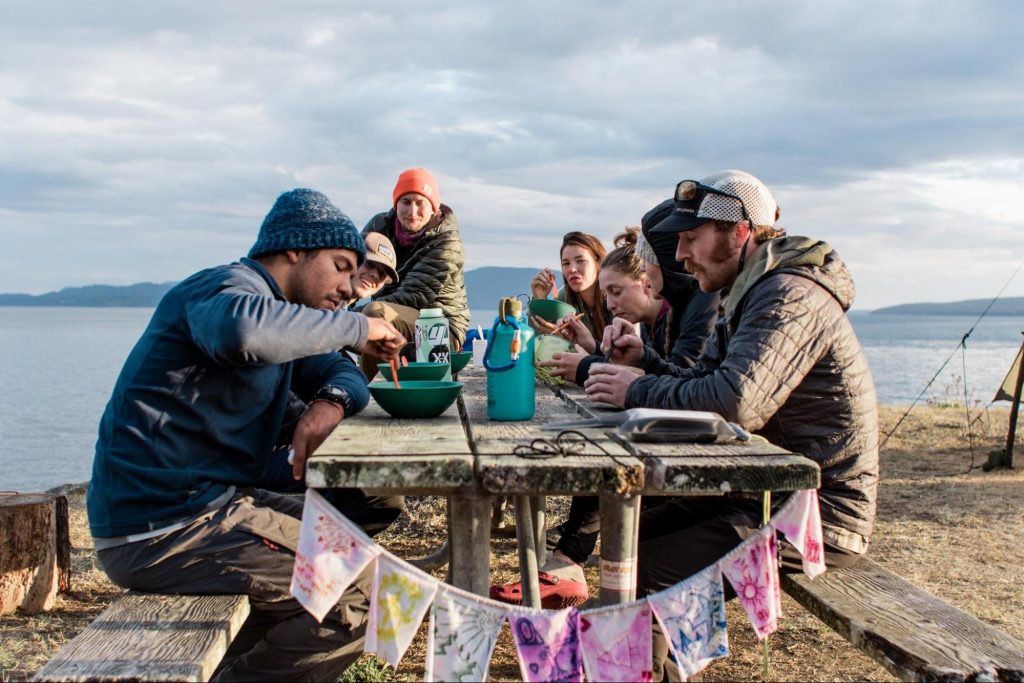 Sitting down for a meal with the crew was always a favorite time of the day, and usually included a lot of laughs and reflections of the day’s events. 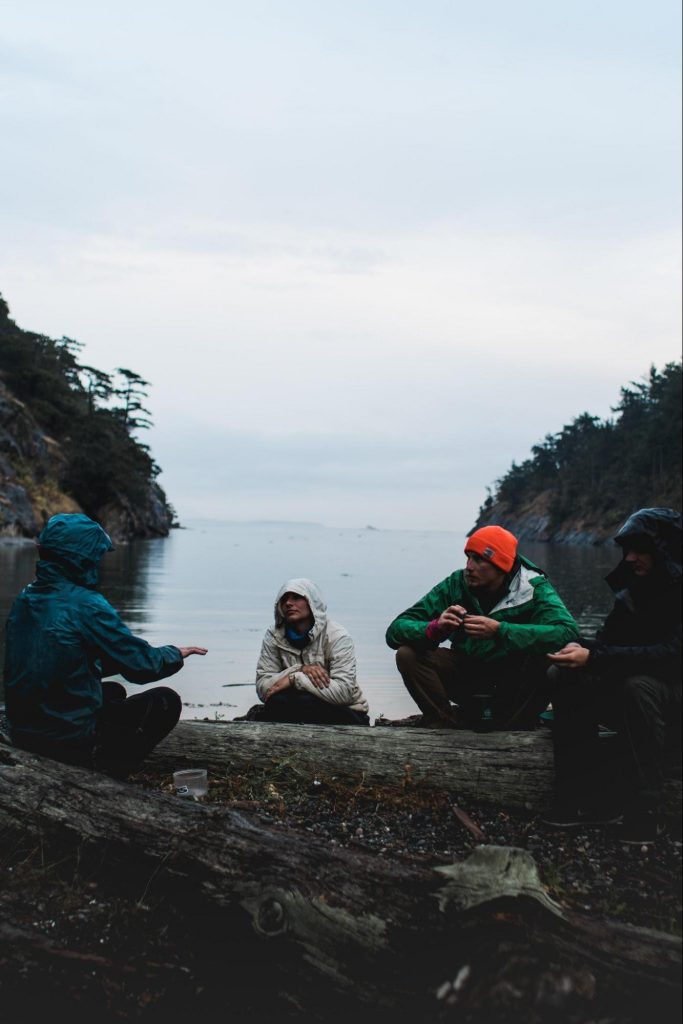 Lessons come in all forms, and the best kind take place on the beach of a cozy inlet in the islands. At sea, we took turns looking over charts and setting course for the next day’s navigation plan. This allowed us to plan our day accordingly and get to our next destination. 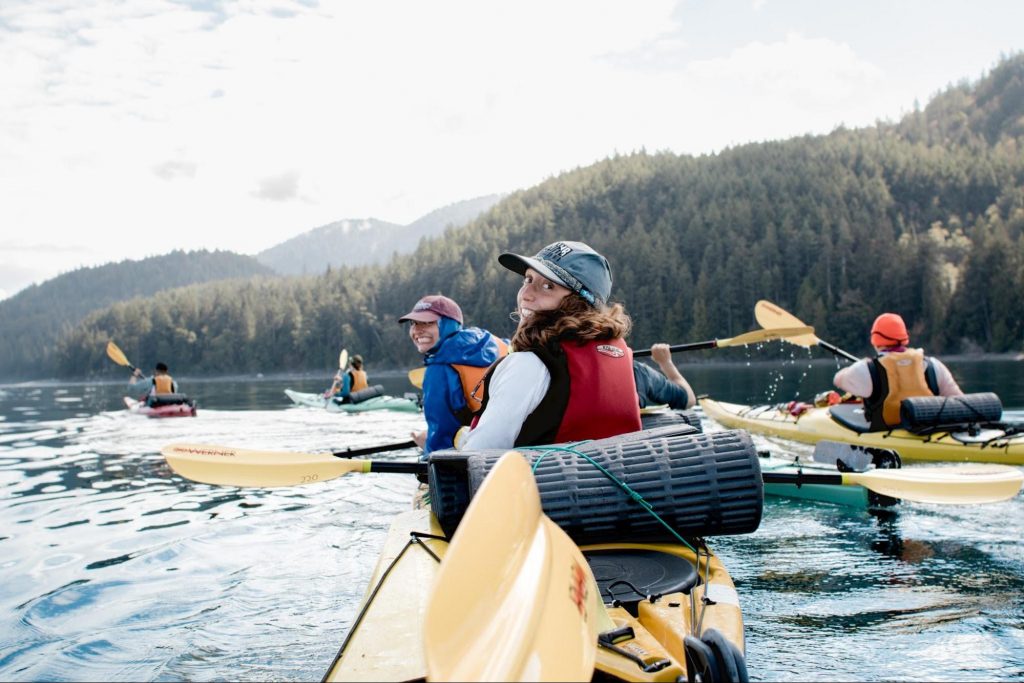 The crew paddles into Cypress Island after a big day of channel crossings. This required a lot of communication and teamwork to make sure we navigated safely and on our route. 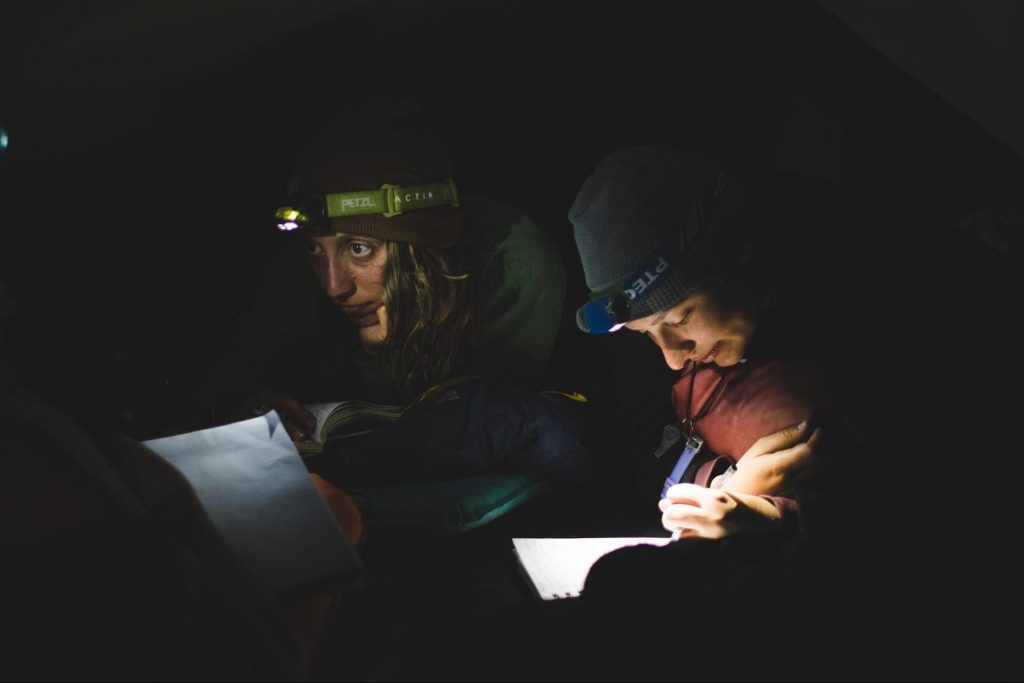 Not wanting to forget any of the day’s events, headlamps were turned on every night under the shelter of a tarp and the warmth of a sleeping bag to journal our greatest moments and lessons from the day. 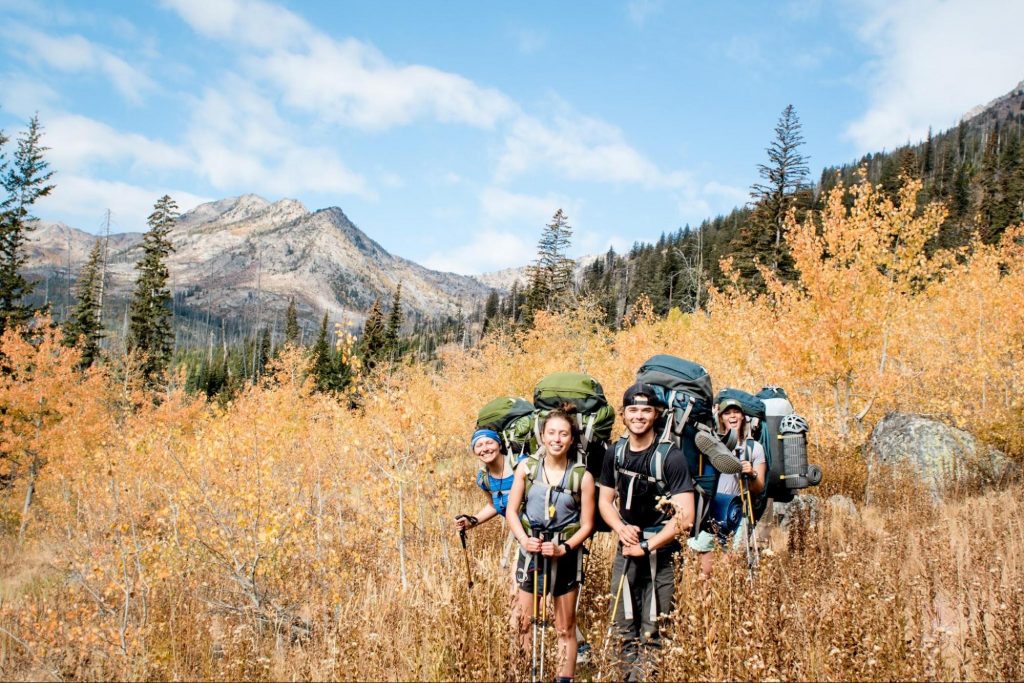 Trekking into the Lake Chelan-Sawtooth Wilderness in the midst of autumn meant experiencing some of the most vivid colors in nature. 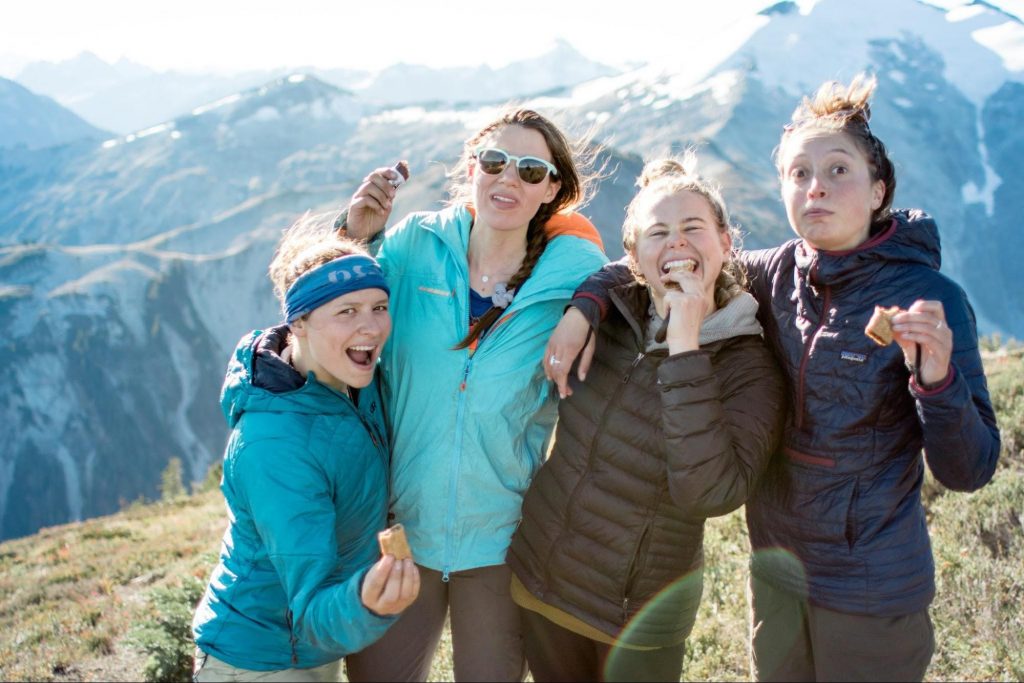 We quickly chose our favorite trail snack and found every reason to celebrate with a pass around of fig newtons. 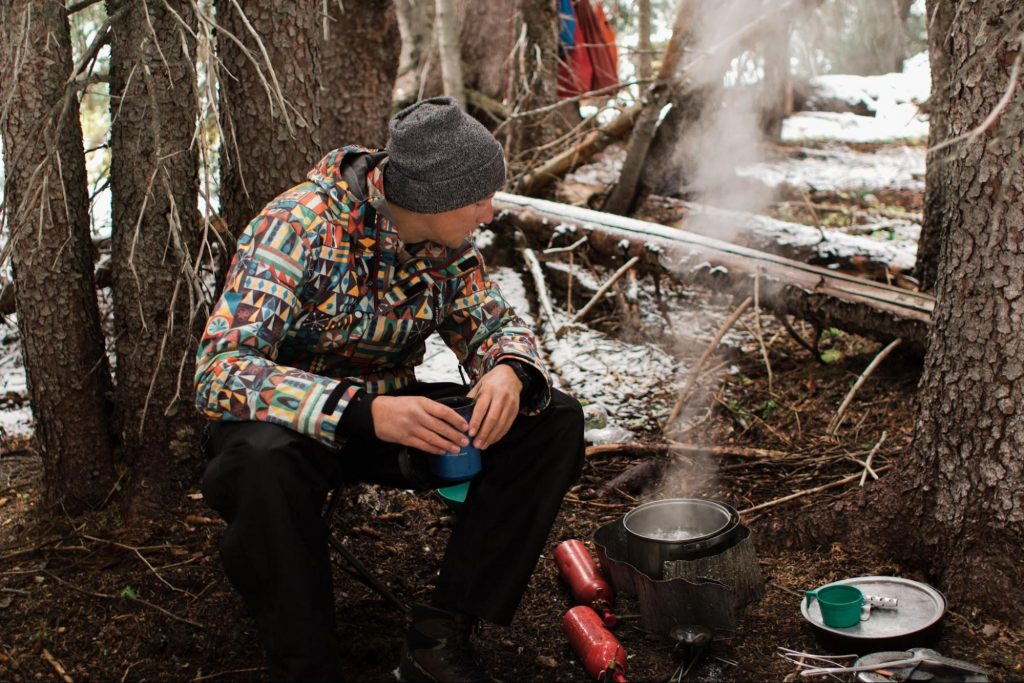 As snow began to cover the ground, morning and evening tea became a must among our crew and a welcomed favor to whoever would sit by the boiling pot. 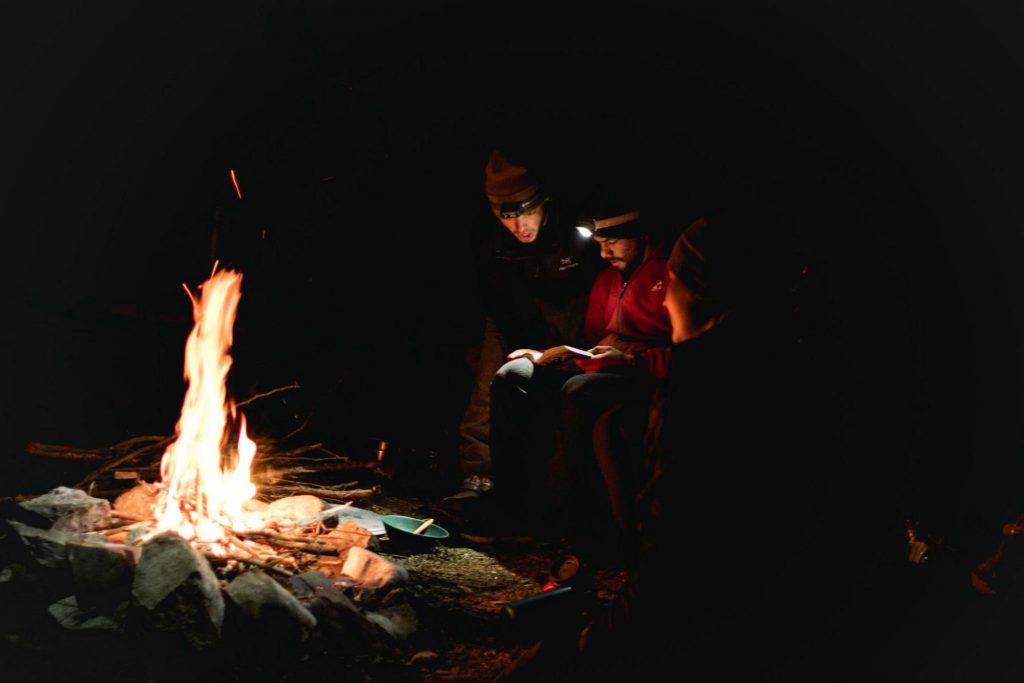 Every night after dinner we would gather around and share stories from the day, ideas for the next, and lessons learned either from each other or in nature. This night in particular Joe and Henry shared with us nature facts about some of the wildlife species we had seen on trail. 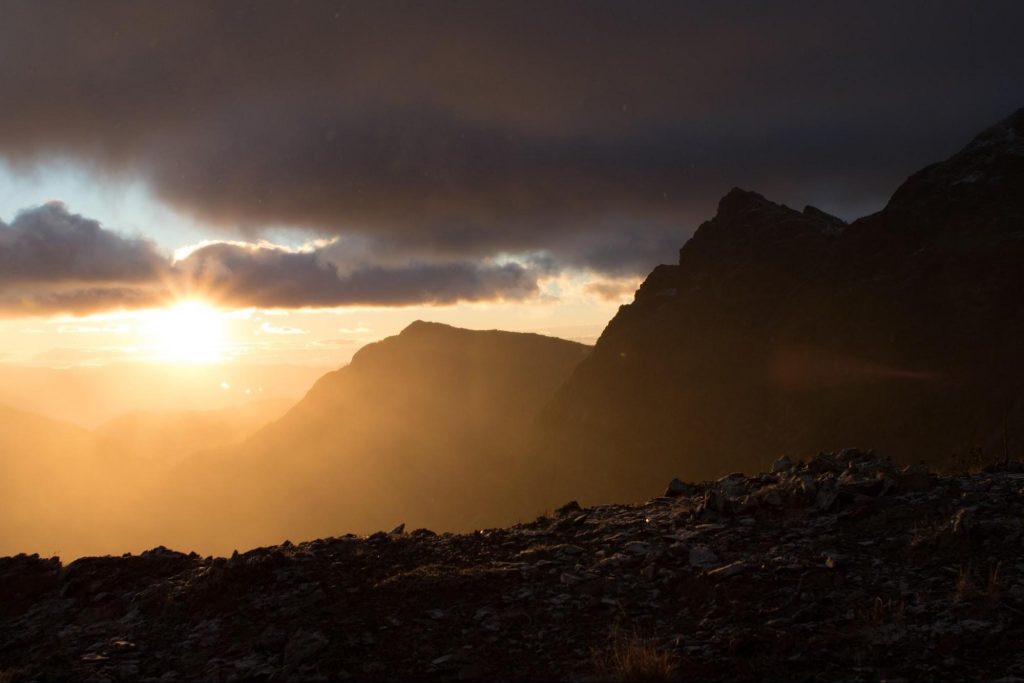 Sleeping outside means never missing a sunrise or sunset and that was one of the greatest daily celebrations of life on expedition. Miles in and smiles still very prevalent as we hiked through a winter wonderland. 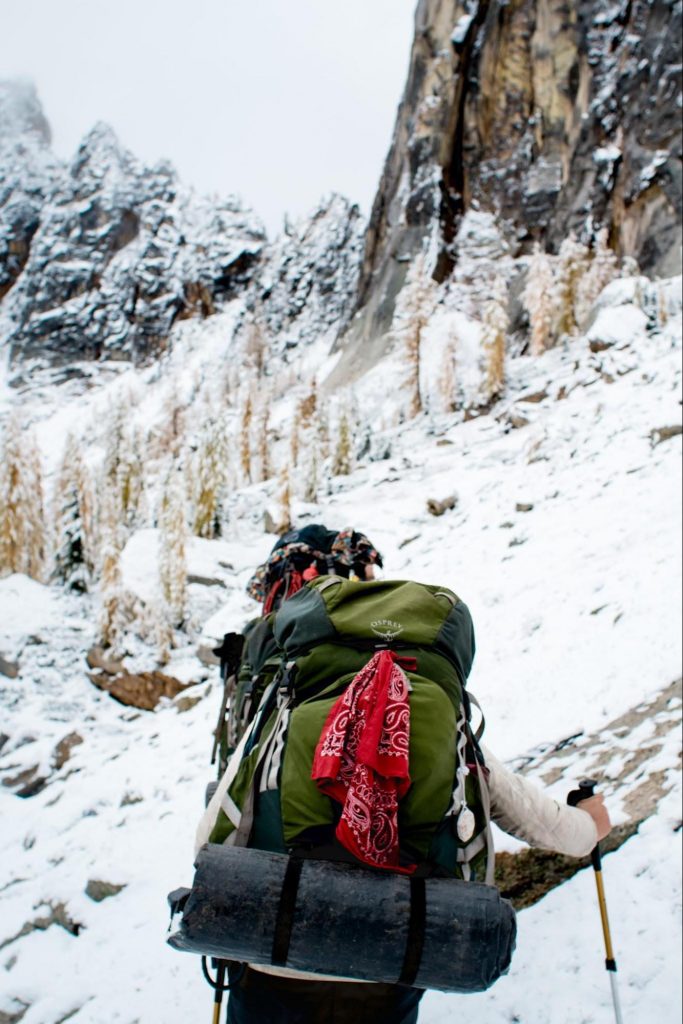 The crew got to experience the beauty of the changing seasons one mile at a time. 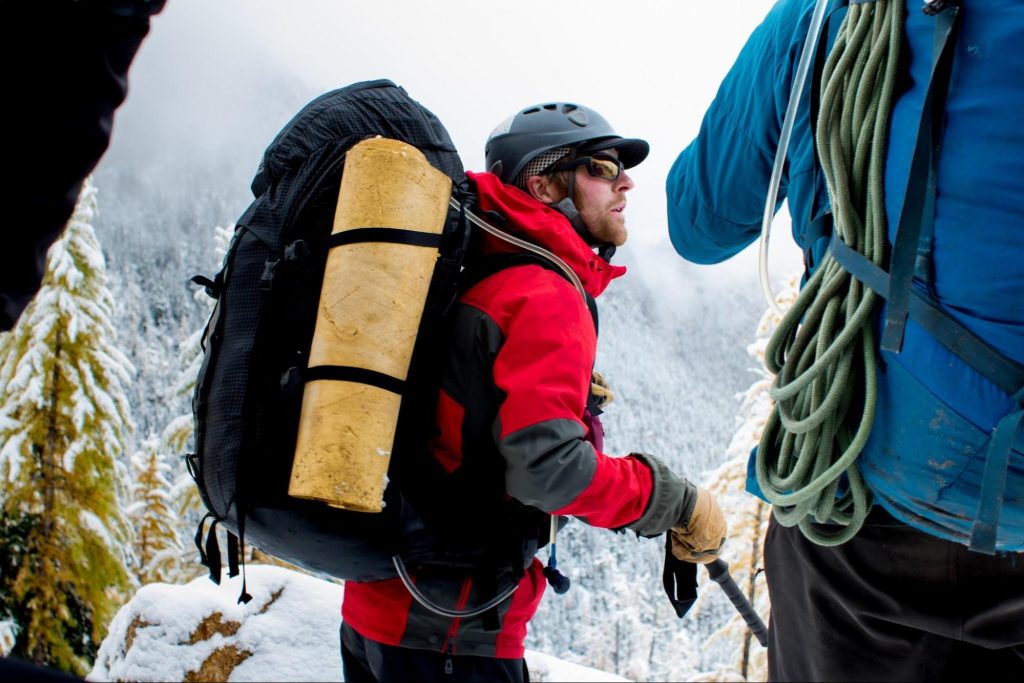 One of the course Instructors, Alex, scopes out the next course of action. 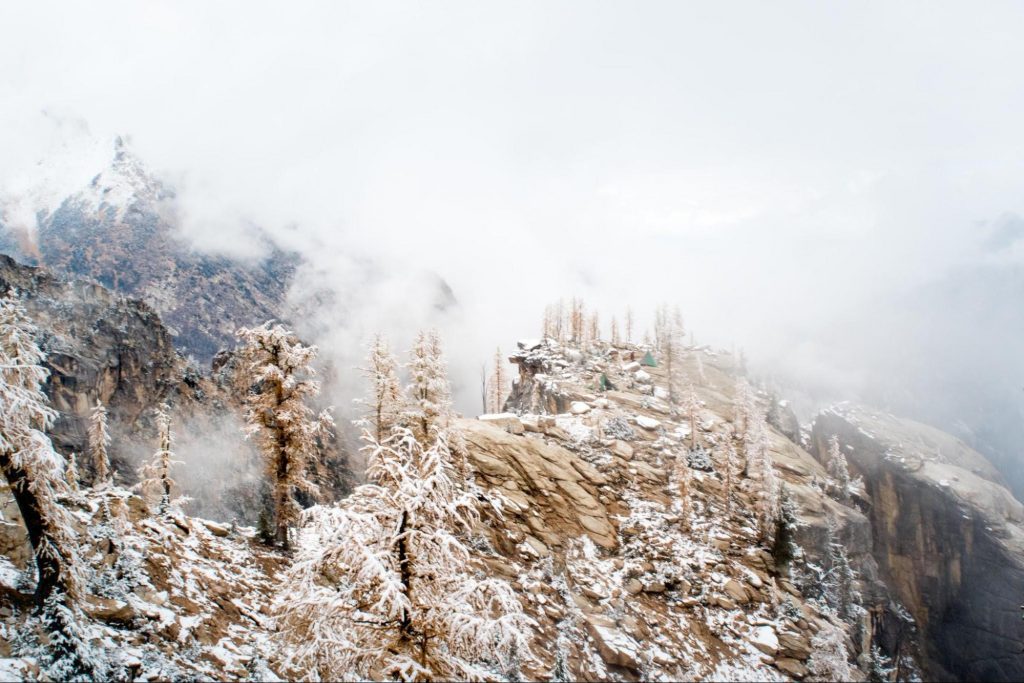 Peak closely and spot one of the greatest campsites of all time. This was taken from the top of a saddle after a fixed line traverse. Being the last of the group to ascend means having the largest fan section at the top waiting for you. Our crew of eight and our Instructor, Alex, amidst the beauty of the North Cascades National Park.

How to Reset Communication Habits After A Stressful Year Read More
2021’s Best of the Best for Outdoor Enthusiasts