Rock climbing evokes images of El Capitan in Yosemite, or the Eiger in the Alps, grand classics that took tremendous human imagination and effort to climb. It seems the human psyche has been drawn to climb to the top of things since the beginning of time. From the top of a mountain, a cliff, or even a hill outside our hometown, we gain perspective, see long distances and imagine great things. 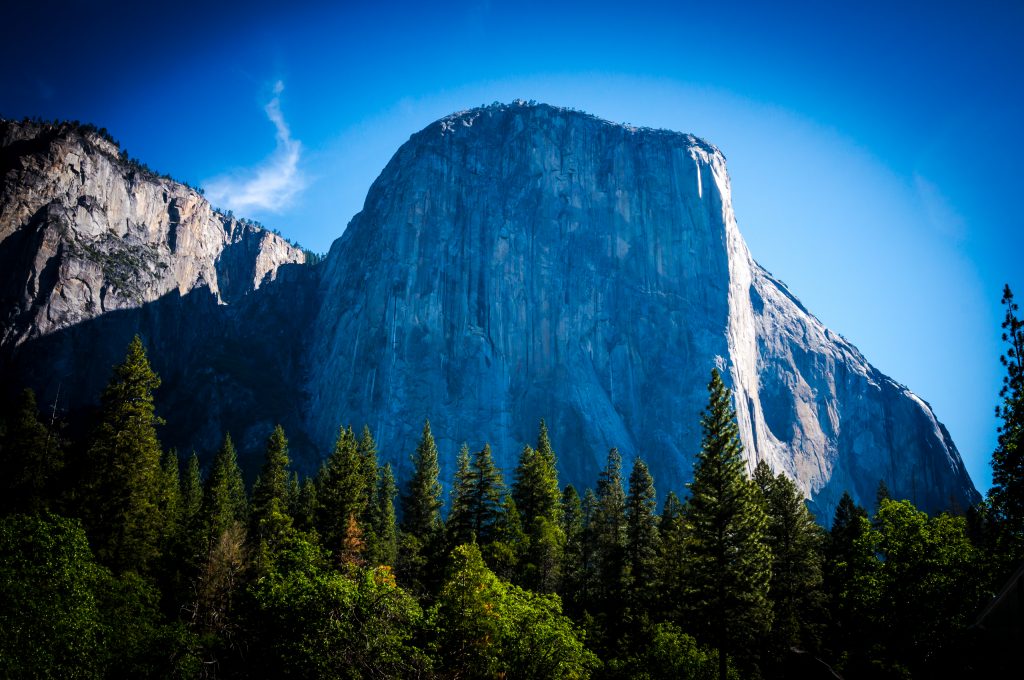 The dawn of modern climbing is found in Europe in the 1800s. Men, and a few women, who had financial means funded expeditions to make their way to the top of mountains, mostly in the nearby Alps. The jagged peaks of the Alps called out their fortitude and endurance. Equipment was sketchy by today’s standards: heavy wool clothing provided warmth and cotton canvas tents were used for shelter. Ropes of twisted natural fibers had nowhere near the strength of synthetic ropes used today. Climbers took great risks, drawn to the headiness of heights despite the dangers.

At that time, “the sun never set on the British Empire,” and Brits had a network of connections all over the world. This reality facilitated climbs in many great mountain ranges, including the Himalaya. Mountaineers would hire porters and spend months going over land to climb the great peaks.

Over time, standards and equipment evolved, and climbers tested their skills against rock faces. They used the rock cliffs close to home as a training ground for steep rocks they would find on their mountain ascents. Rock climbing was born.

In the 1960s and 70s as rock climbing gained popularity, bouldering became a way to master hard moves without going high on a face. Dedicated climbers would work out the precise sequence of moves required to do a difficult section of a climb, and became stronger and stronger, making possible the amazing ascents we see today.

Climbers who ascended the great faces stood on the shoulders of those who went before them. When you are out rock climbing, whether on your own or on an Outward Bound course, you are also standing on those shoulders.

We can break down climbing into several types: bouldering, top roping and multi-pitch climbing.

Bouldering happens near the ground, with no rope, but spotters or a foam crash pad helps provide an easier landing on the body.

Top roped climbing means that somehow someone got above the climb to set up a rope; they most likely walked or scrambled up the back of the crag. The rope comes to the climber from the top of the climb, thus “top roping.” There may be several options to arrive at the top, and the climb is limited by the length of the rope. A belayer, the person on the ground who secures the climber, provides safety by holding one end of the rope, anchored in, as the climber ascends attached to the other end. Sometimes the belayer sits at the top of the climb; in other situations the belayer is at the bottom, next to the climber. In the latter, called a “sling shot belay,” the rope goes from climber to an anchor at the top and back down to the belayer.

On multi-pitch climbs, experienced climbers called “lead climbers” take special hardware to place in cracks of the rocks as they go up, and then clip the rope to those metal pieces with carabiners, or metal clips. When near the end of the rope, or “pitch,” the leader attaches their harness to an anchor – something solid – then belays the follower up to their ledge. 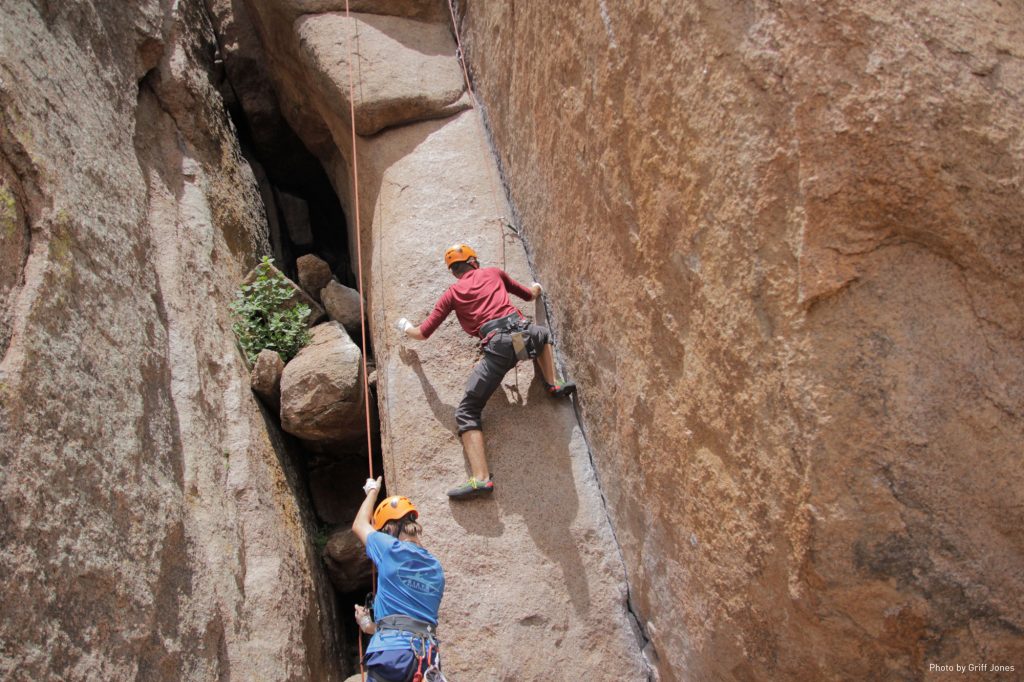 You may have heard of several other types of climbing: Solo climbers have no safety system; they climb routes and sometimes quite high with no rope. As you might imagine, this isn’t something you’ll be doing on an Outward Bound course! Aid climbing uses technical gear as an aid, for some foot holds and hand holds, rather than the rock. Almost all climbing with Outward Bound is free climbing, where equipment is used as a safety back up, and your hands and feet are climbing on the rock, not using gear for hand holds and foot holds.

Rappelling is a means of descent, using friction and special hardware to slowly slide down a rope. 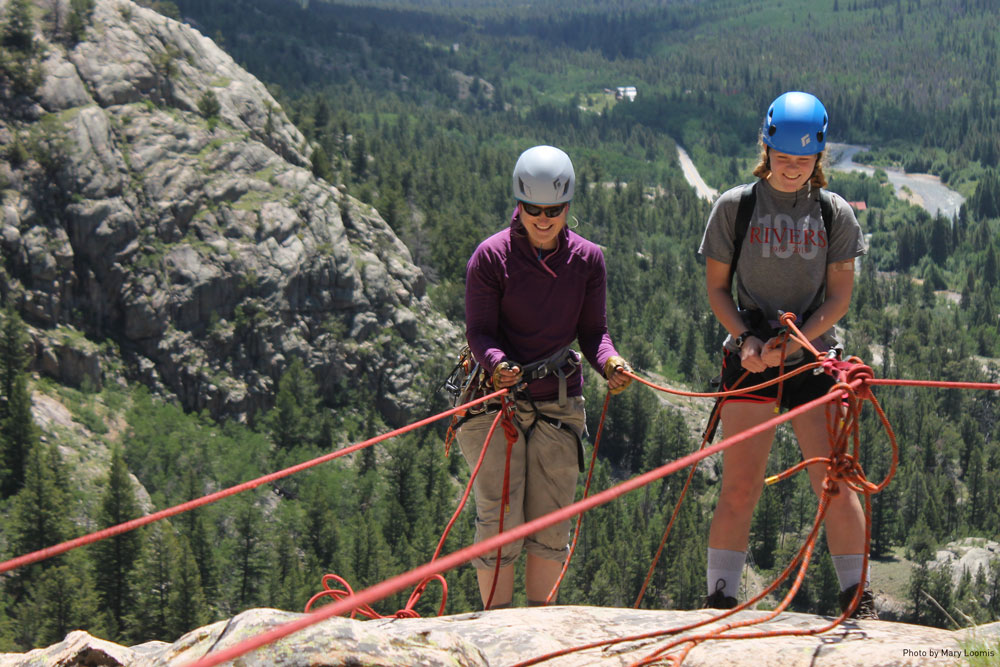 Outward Bound Students on an expedition rappel down the mountain.

When rock climbing on an Outward Bound course, you don’t need to have any experience. Outward Bound provides the expertise and equipment, from ropes and hardware to helmets and anchors.

Rock climbing appears in Outward Bound courses in a variety of ways, depending on the course area. You may find yourself dedicating two or three days to climbing, rappelling and belaying in one general area. On other courses, climbing is introduced early on, then later incorporated into a peak climb. When canyoneering, you may use ropes as a back up as you climb canyon walls, or rappel into a beautiful canyon.

Communication between the climber and the person holding their safety line, the belayer, is essential and you’ll use very specific commands while climbing to avoid any confusion. You’ll practice “on belay” and “climbing” as you begin to climb.  Later the commands you learn may be used in situations when you and your belayer are apart from each other and hearing is more challenging. Using the specific commands becomes super important!

The word “belay” means to hold fast. Its roots are in the French language, as are several mountain terms – and there’s that Alps influence! When you climb, your belayer will use a specific system to hold you, where friction does most of the work. You’ll also have the chance to serve as belayer, holding a fellow climber as they go up the rock.

On an Outward Bound course, all of your climbing equipment will be provided. You’ll learn to fit your harness and helmet, safely use locking carabiners and belay devices, and care for ropes. You’ll learn techniques for moving up the rock and for serving as the safety system for others as they climb. Instructors will start at the beginning, and guide you through the process to learn everything you need to be safe on the rocks.

You’ll also learn how to descend, or rappel. Some rock climbing routes offer a way to walk back to the bottom of the climb. Other times you’ll need to use a descender, a metal device that uses friction, to allow you to control your speed as you go down the rope attached to your harness.

Climbing shoes can be as simple as the boots you hike in, to smooth-soled tennis shoes, to climbing shoes with special soft rubber soles. A smooth and pliable sole makes for easier climbing. But there is much more to climbing than what footwear you’re wearing. We’ll talk about technique basics below.

There are a few basic knots that are useful to know as you start learning to rock climb.

The Figure 8 knot, in the form of double-figure 8 and figure 8 follow-through are very useful for tying into your harness. When tied properly, these knots can’t come undone (which is why we use them!) and are easy to recognize and can be untied relatively easily after being weighted.

Another common knot which has been used since early climbing days is a sailor’s knot, the Bowline. It is sometimes used as a simple way to tie a rope around the waist.

You could find yourself on many different kinds of rock when you go climbing. A rock climb might present you with low angle sections, and high. Rock texture can be rough and easy to “stick” to, or it can be smooth. The face could have big hand holds and foot holds, or it might seem smooth and you’ll wonder how to ascend. You may have big ledges or small cracks or “eye brows” to use for holds. You may encounter low angle “friction” climbing, with few holds at all, but with the technique you’ll be able to climb easily.

Whatever the rock face offers you, here are some general tips to get you going.

Rock climbing is an exhilarating activity that requires teamwork, safety awareness and skill development. It allows us to reach special places and vistas we’d not otherwise have a chance to see. It’s important to start out with someone who has the expertise, whether on an Outward Bound course or with those who are either outdoor professionals or who have extensive experience. Sometimes you don’t know what you don’t know, and with rock climbing that can get you into serious trouble. 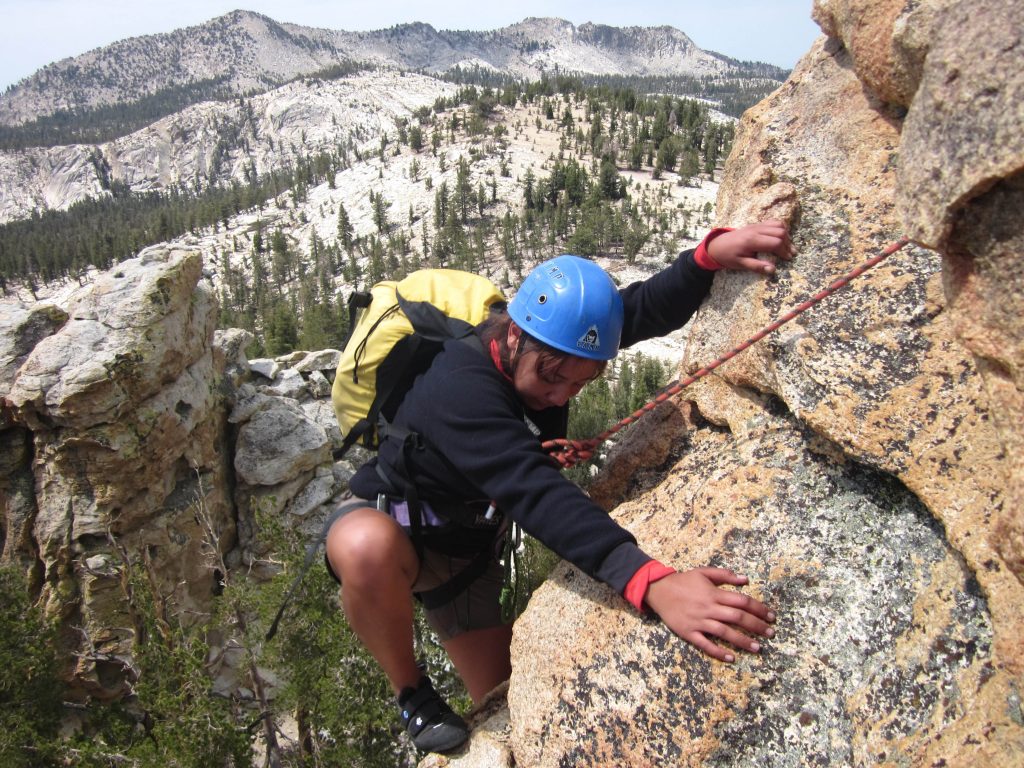 Outward Bound expeditions provide all of the equipment and teach you everything you need to know about rock climbing.

“You cannot stay on the summit forever; you have to come down . . . so why bother in the first place? Just this: What is above knows what is below, but what is below does not know what is above. In climbing take careful note of the difficulties along your way, for as you go up you can observe them. Coming down you will no longer see them, but you will know they are there if you have observed them well. There is an art of finding one’s direction in the lower regions by the memory of what one saw higher up. When one can no longer see, one can at least still know.” -Rene Daumal, Mount Analogue

Interested in learning more about rock climbing? Check out these Outward Bound courses that will teach you everything you need to know!

From nature-based scavenger hunts to lessons on leadership and trust, explore five outdoor activities that can be incorporated into any lesson plan. Whether your class always takes place outdoors or…...