What Mountaineering Can Teach You About Yourself

That evening we had decided to turn back. “We” consisted of myself, two other co-Instructors and nine high school students on a 22-day rafting and mountaineering expedition on the Deschutes River and in the Three Sisters Wilderness of Central Oregon. We were well into the mountaineering section of our course and realized the crevasses on the Collier Glacier were too dangerous to pass. As we watched the sun dip below the horizon and the shadows become indistinguishable, it was clear we were going to sleep out on the snowy pass between Middle and North Sister. 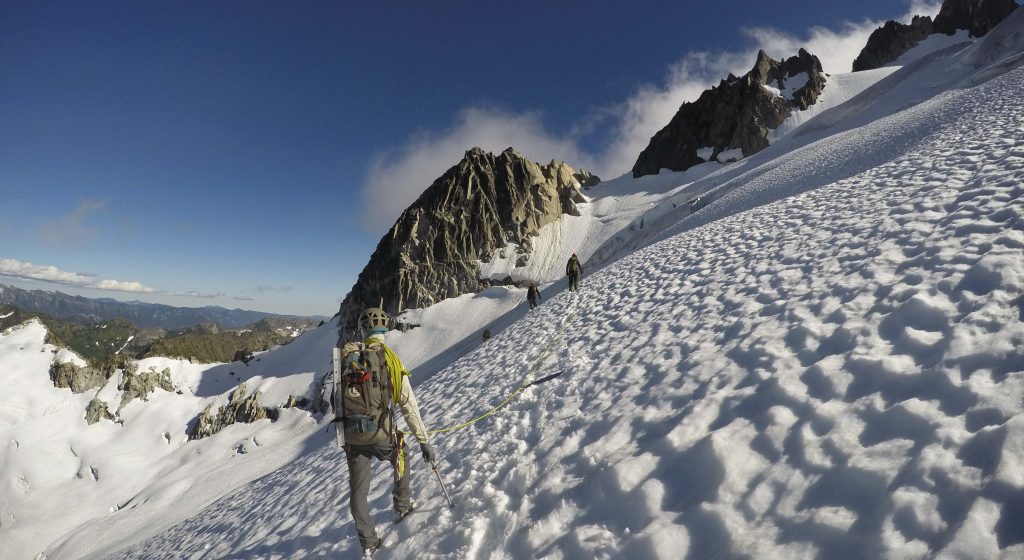 We had just eaten peanut butter and jelly bagel sandwiches, and felt at ease to hunker down for the night. “Happy Birthday,” I whispered to my co-Instructor as we settled down to sleep. It was midnight, and my co-Instructor had just turned 25 on day 16 of our course. The stars were bright and the air was crisp.

Our itinerary for the next two weeks in the mountains seemed ambitious, but within reason. We took our students through a ground school for fixed lines, setting up a mock course that took them through the basics of rope travel. We split the team and had two successful summit attempts of Broken Top. After, our objective was the saddle between North and Middle Sister. We traveled to the base of Hayden Glacier to teach snow school, and learned the finer points of footwork, rope team travel and slid down slopes practicing self-arrest. We would ascend the Hayden Glacier and camp on the western slope of the Sisters. Later on, we would attempt South Sister, and somewhere in-between our students would reflect during a formal Solo experience.

How to Be a Better Communicator

Throughout our course we focused on the importance of different kinds of communication. Transitioning to the mountains from the river, we thought our students were ready for more independence, as it would force them to start talking to each other and rely less on the Instructors as a buffer. At the beginning we could tell our crew lacked the necessary skills in the finer points of verbal and non-verbal cues, which is extremely important for mountaineering. The mountains can be hard and unforgiving. Successfully navigating the Cascades requires honest and open communication—something our crew needed to work on. You must know how to effectively ask for help. The basis of any good summit attempt is communication, just as it is with any other human endeavor. 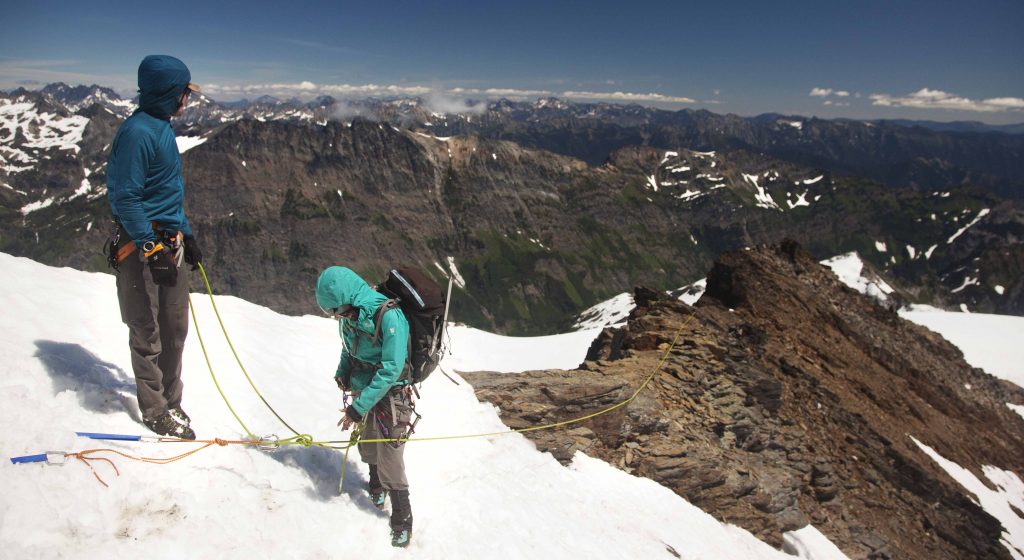 How to Pursue Goals with Intention and Patience

On the morning of the summit attempt, we brushed up on the hard, technical skills, and now it was time to put the efforts to the test. We suited up: harnesses over bulky bottom layers and backpacks awkwardly buckled around webbing waist loops. Ice axes pointed adze forward, and tied into the rope via a butterfly knot, we started the slow trudge up the steep mountain pass.

As Instructors we often say, “slow is smooth and smooth is fast.” I find that I say that phrase to myself even when I am not on course and balancing too many things on my plate. A mountaineering expedition—especially with more than a handful of people— is slow and deliberate. You are never moving faster than the person in front of you, and it is best to keep a conversational pace to conserve energy.

As we lumbered on upward, our first clue we would not summit was the uncharacteristically large crevasses spotted intermittently on the Hayden Glacier. But we set out good wishes that the west side would be different. At the top of the pass, overlooking the western slope of the Cascades, the sun was low and the light became golden. Unfortunately, that meant that the snow was turning from the consistency of mashed potatoes to ice. Cries of “Arrest!” rang through the air, and as Instructors we were each forced to help arrest our rope teams, keeping our students from losing ground. All those hours of training were put into action, and our energy reserves were dwindling.

As our students learn, all summit attempts are just that—attempts. If nature has a different plan, you turn around, go back or adjust your plan. We decided turn back and bivouac—an improvised, temporary camp or shelter—in the open snowfield at the top of the pass. As we started our slow ascent back from where we came, kicking steps and digging stable ground with our ice axes, the true test began. Under times of stress, exhaustion, and nervousness, our true characters come out. We see what we are truly made of and how far we can push ourselves. 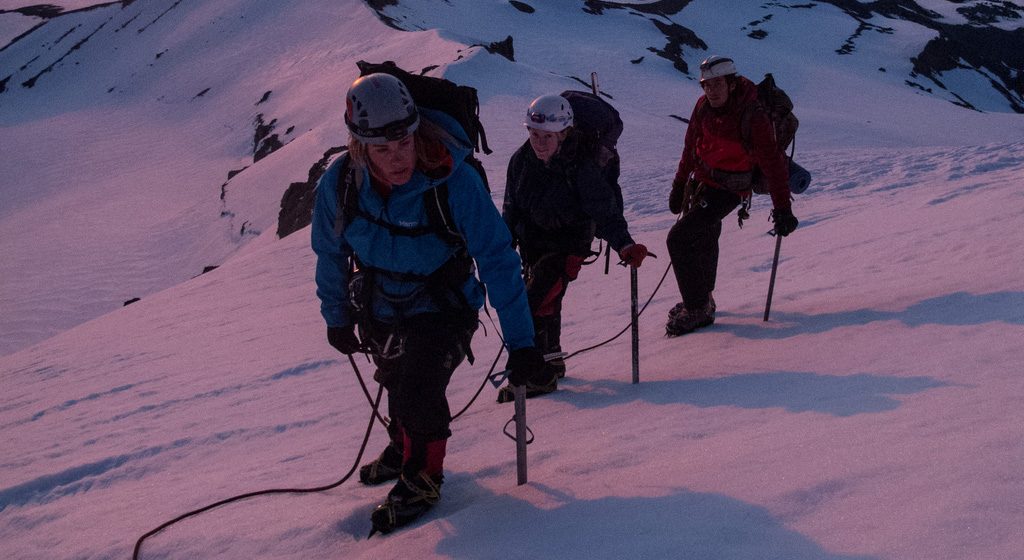 On a mountaineering expedition, you learn how to use the fancy gear, but what you really learn is how to handle yourself with humility, grace, humor, generosity and patience. If you don’t, you end up learning how to bicker, resent others and be angry. Both sides of the proverbial coin teach us about the nether regions of our personalities and test our moral compasses.

Backing off from an objective isn’t failure, but a renegotiation of terms that can lead to a re-imagination of what your real goal is. Living simply out of a well-organized backpack isn’t an exercise in frustration and fatigue, but of learning how to be deliberate and intentional with what we consume and the things we carry. Emotional, as well as, physical baggage weigh us down. We are never more aware of our effect on others than when we are living communally, so ere on the side of compassion. These are the true lessons we learn on a mountaineering expedition.

Sir Edmund Hillary said that “It is not the mountains that we conquer, but ourselves,” and I would have to agree, partially. There is no physical mountain to conquer, but our own personal demons that need to be put aside to stand hand-in-hand on the summit or know when to turn around. 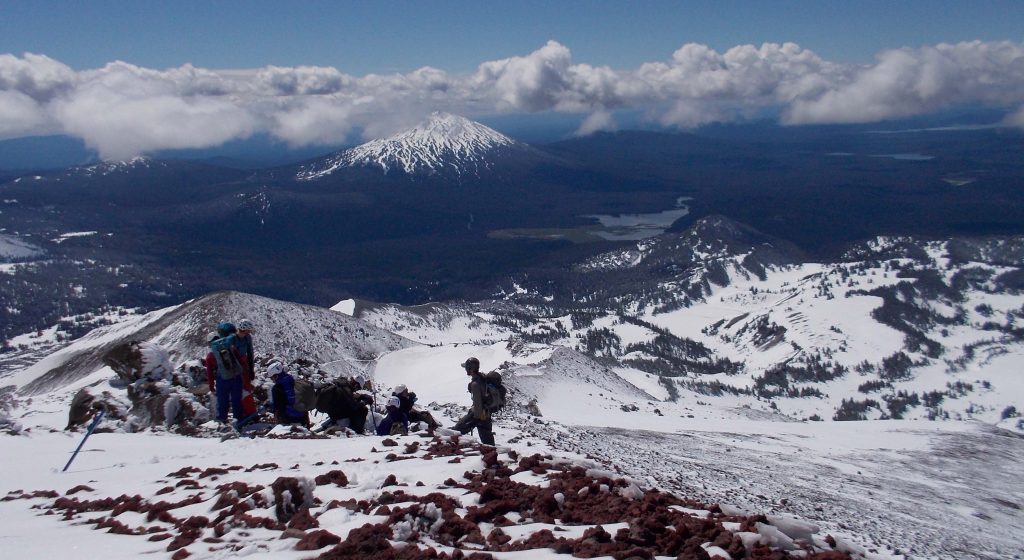 The sun rose over the pass, illuminating the faces of our team and basking the sleeping birthday girl in a rosy hue. My co-Instructors and I smiled at each-other. “Happy Birthday!” We shouted in unison, waking up our students in the process. Our backs were stiff and hips sore, but waking up on a snowfield, bathed in an aura of strength and tenacity from the previous day’s epic travels was truly amazing.

Kate Samp is an Outward Bound Instructor in the Northwest. She loves climbing mountains, yoga and whitewater rafting. She writes from her home in Bend, Oregon.

Nourishing the Tool of Self-Advocacy in Students

Discover how Outward Bound expeditions and programs are intentionally structured to nurture self-advocacy in students. Self-advocacy and self-care are vital tools for students and educators in any group or community-based…...

Read More
What Does Outdoor Leadership Really Look Like?

Outdoor leadership is defined by technical skills, but it’s also so much more. Discover the skills that make up true outdoor leadership. At Outward Bound, we’re passionate about sharing the…...