A Match Made in the Wilderness: An Outward Bound Love Story

When you think of Outward Bound, you think of challenge and adventure. You think of tarps, backpacks, cat holes, canoes, bickies, blisters, topo maps and mountains. But, you don’t really think of love. For this Valentine’s season, we’re going to pull back the curtain a little bit to tell you a love story about how Outward Bound brought Dan and Cate together, former Instructors in the field and now co-instructors in life.

The Beginning of a Love Story

Dan and Cate put me on speakerphone from their home in Sandpoint, Idaho, where I wove my way through our interview questions, trying to piece together a timeline of their long and complex involvement with Outward Bound. Cate was a student on one of the first all-girls courses in 1970. She went on to become a Lead Instructor at the Pacific Crest School (what is now the Northwest Outward Bound School), North Carolina School and Hurricane Island School. In 1983 she came back to the Northwest to develop and instruct for a new program. 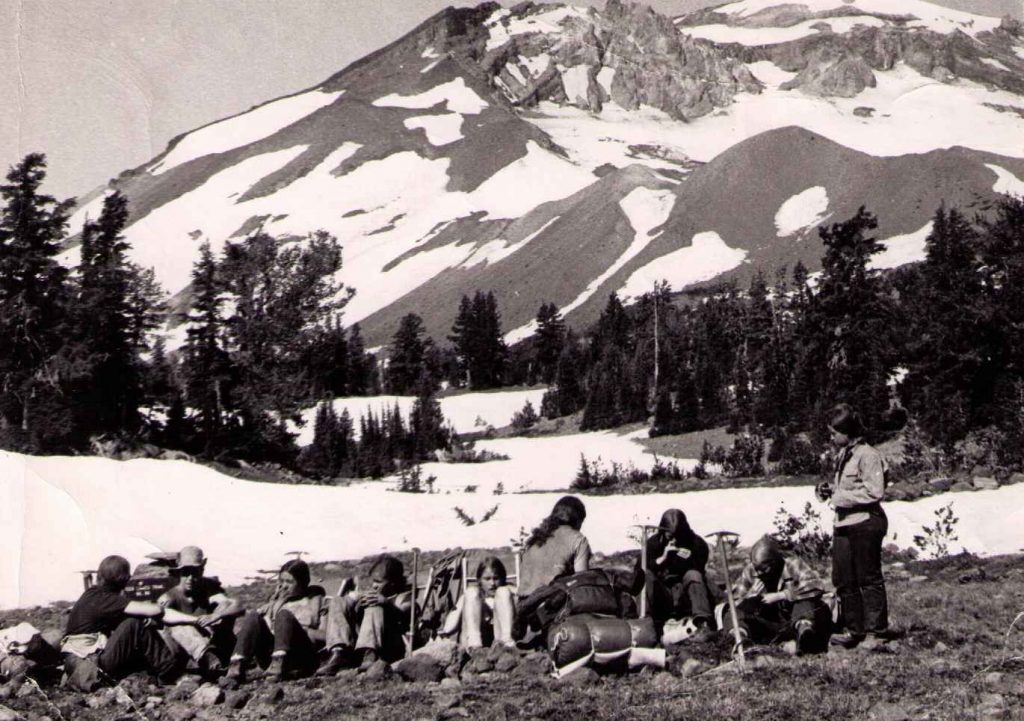 Photo shows Cate (in the center) on an expedition in 1970.

Dan began instructing for the Pacific Crest School in 1982, and was called on to instruct one of the courses in the new program. He was climbing in Yosemite Valley during his off-season when he received a letter from Cate, introducing herself as his Lead Instructor. Dan arrived to Camp Sherman, which in 1983 was the location of the Pacific Crest School’s “basecamp” in Central Oregon. The small plot of land had no warehouse to speak of, just a small A-frame ski lodge, a group of trailers and an army tent full of gear.

Surprisingly, Dan and Cate didn’t have much to say about initial impressions of each other. “I liked him, he talked a lot about philosophy, but we were there to lead a course. We were professionals and I think neither of us entertained romantic thoughts because of that.”

The Spark? Dried Socks Over a Radiator

Their early June course in the Cascades brought consistent, unrelenting cold rain on top of snow for days on end. Students and Instructors were both feeling the harsh weather challenges, and word got back to Cate at basecamp. She hiked out to the foot of Mt. Washington where Dan’s crew was hunkered down just above tree line. After meeting with the group, Dan and Cate hiked out to a nearby ski lodge to use the phone, leaving the crew with ample staff.

Dan sat in the truck while Cate went inside. The cab was warm and beads of condensation rolled down the thick windows. Dan rubbed his hands together and watched Cate stride off into the lodge. He noticed she had taken off her soaked wool socks and left them on the floor of the truck. He opened the door, wrung out the socks, and draped them over the truck’s radiator to dry. After her long phone conversation with base, Cate came back to the truck to find dry socks. Cate commented, “I just thought that was really thoughtful and kind. After all, dry socks are like gold in the field!”

“I just wanted to do something nice. It was really impressive the way she handled everything out there considering the circumstances. I really got to see her work under fire. I was very impressed with what kind of person she was. I often wonder if there was good weather, if our marriage would ever have happened,” Dan said.

This “Thing” Is Happening

After their second course working together, they went for a walk through the forest of Camp Sherman and acknowledged “there was this thing happening.” After that season, their paths took them in different geographical directions to pursue schooling and career interests. But they met up for a camping trip along the Metolius River, and decided to announce themselves as a couple to their Outward Bound community when they returned. They moved to Eugene, got married and spent 45 days honeymooning in Patagonia in true Outward Bound style.

Dan said, “We wanted an adventure, so we picked a location where there weren’t any guidebooks to speak of. We got rustic naval charts from the Coast Guard and took out a double kayak. We packed food for the entire 45 days without a resupply.” 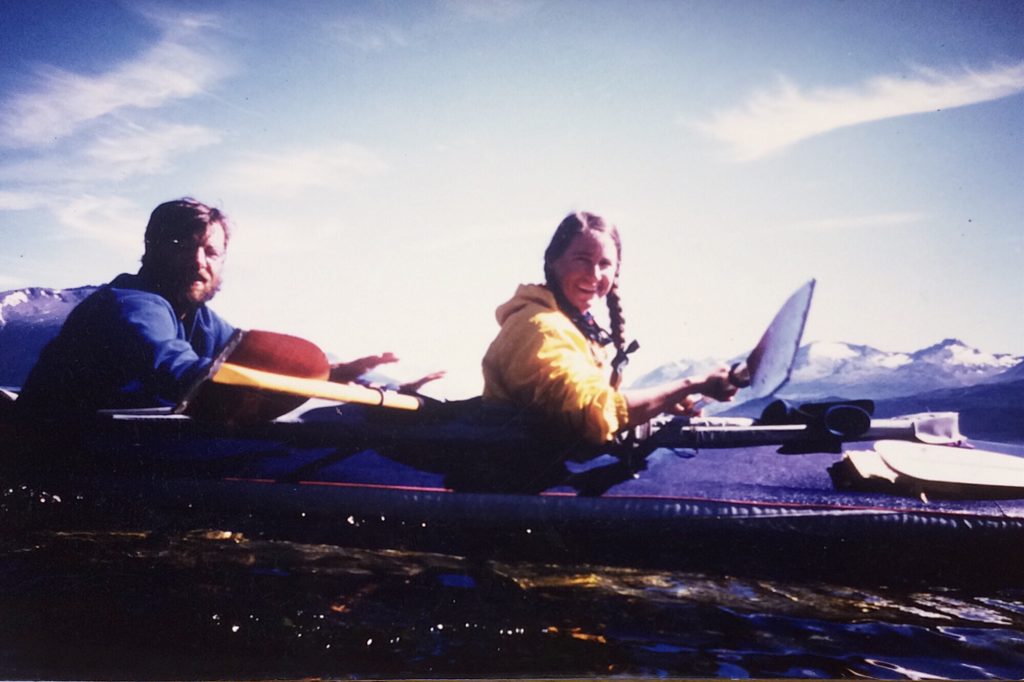 Dan and Cate in their kayak.

Cate says she learned a lot of things as an Instructor that has been useful in a marriage.“Good communication is essential, finding that you are capable of more than you know…similar to being on course, there are challenges you have to face in order to succeed, and you deal with things you would never anticipate happening.”

Nadia, another former Outward Bound Instructor, is also married to and co-parenting with a fellow Instructor. In multiple love letters, Nadia said her partner wrote, “You’re my co-instructor in life now.” The shared philosophy, language and value of wilderness in Outward Bound pulled them together, she said. She thinks Outward Bound Instructors make good partners because they’re open about their feelings and feedback – actively trying to become better people – and make room for both person’s visions. “We know how to work hard, bring the fun, and know who has the final call in certain situations, just like co-instructors do.”

Similarly, Dan said the best preparation they have ever had for becoming parents was as Instructors for Outward Bound. “The students are such great teachers. They kept us on our toes, and taught us to be nice to each other during the most difficult of times.”

Cate and Dan eventually had a son, Matt, my friend and an Outward Bound Logistics Coordinator for the Northwest Outward Bound School. I met Matt in 2014 at our basecamp outside of Bend, Oregon. “Ask them about their Patagonia trip, the significance of Camp Sherman, and ask my Mom about drying socks over the car radiator.” This is the message Matt sent me when I had asked him if I could interview his parents about their love story. Needless to say, I was intrigued. 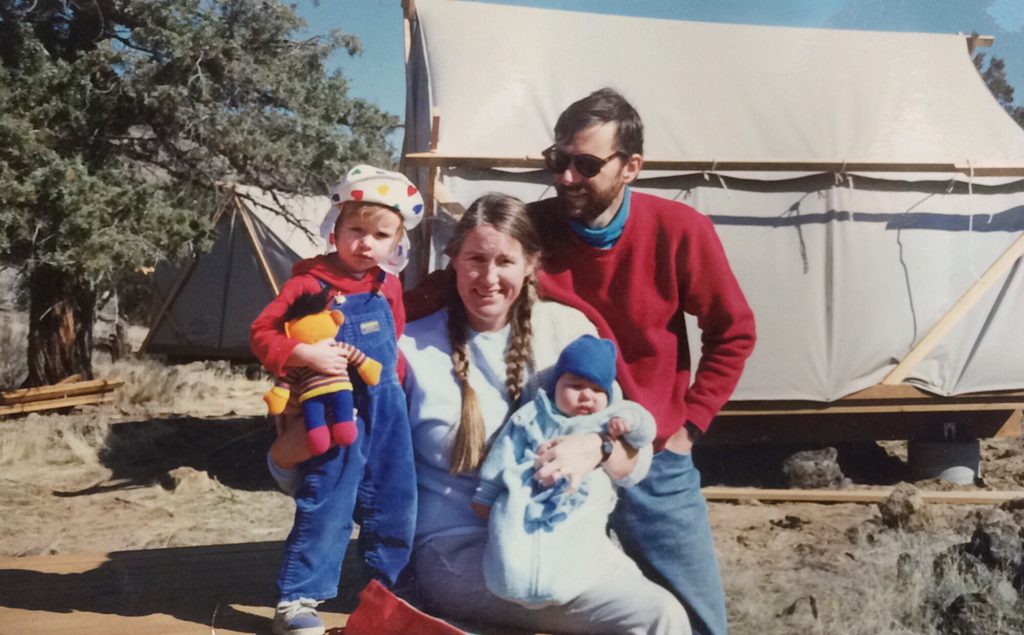 A Love Story With Outward Bound

As a former student and current Instructor I feel like I have created my own love story with Outward Bound. No one dried my socks over a radiator or called me their “co-instructor in life,” but through years of involvement, my humility has grown to a place where I have even learned to love myself. Outward Bound courses are meant to inspire and engage us in becoming better people through challenge and adventure. This translates into different things for everyone, and sometimes even means you’ll be a better partner or parent someday.

Trevor McKee embodies and models the spirit of Outward Bound every day. As a three-time alumni, Instructor since 2009, and recent Course Advisor for the Northwest Outward Bound School, Trevor has served many sides of the School. He can often be found volunteering or running a chainsaw for his local trail crew. Trevor says he doesn’t feel fulfilled without incorporating service into his life. Trevor also believes in making inclusion and diversity a reality in his community. He co-produces the Queer Adventure Storytelling series in Portland, Oregon. Trevor credits his pivotal experiences as a student for giving him the tenacity to pursue his dream of hiking from Mexico to Canada twice. He believes every person should have the opportunity to challenge themselves on an Outward Bound Course to realize they are capable of more than they ever thought possible.

4 Ways to Eat Well in the Backcountry

This post was originally published on June 14, 2018, and updated on February 23, 2021. Food is an easy conversation starter among fellow adventurers—sharing dishes and traditions and cooking together…...

Read More
When Is It Time to Upgrade My Climbing Gear?